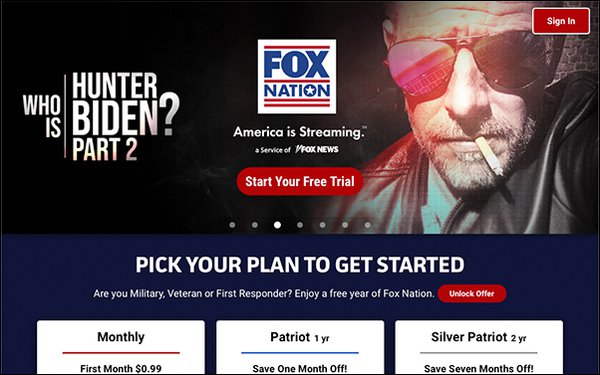 Traditional TV news channels have one common denominator: No matter what your political leaning, older-skewing male viewers are key to core audiences.

But Fox Nation -- a streaming news service of Fox News Media -- has other ideas about where its growth might be: More female-skewing content.

It is looking to build on other female-leaning content on the site, including real estate TV shows, documentaries, true crime stories and other programming.

Fox Nation is even scheduling fictional movies on its streamers. One executive tells the Hollywood Reporter they think of Fox Nation as “a lifestyle and entertainment service.”

To be sure, true crime content always fits the bill.

All one needs to do is survey those prime-time TV networks' “procedural crime dramas” that virtually all TV channels have. Think about big-time TV franchises like “NCIS”, “Law & Order,” “CSI” and “Chicago PD” and how episodes are written.

Prime-time TV programming executives always like to talk up the reason here: Female viewers especially like to solve "mysteries" in stories, figuring out where things are going and where the ending might lead to -- one that is typically satisfying.

Unscripted “reality” TV shows also work well here -- also for cable networks. Even in the wake of new streamer options, TV networks can count on the consistency of their older, more female viewers.

Fox News Media -- as all legacy TV news channel groups -- want growth, looking for ways to differentiate themselves from other streaming platforms as well as their  linear TV networks, still producing big money.

While these news-content focused streamers do sprinkle some straight-ahead newscasts on platforms, they need to be careful.

The trend, however, is that big TV network groups] ad revenues and distribution fees will continue to drift lower, while at the same time, looking to shift resources/programming to streaming. It’s the delicate dance all legacy TV networks need to do.

But as in any close, popular dance duo, watch out: There is always someone who wants to cut in.