Every Dog Has Its Day At Bark, Krispy Kreme, SimpliSafe 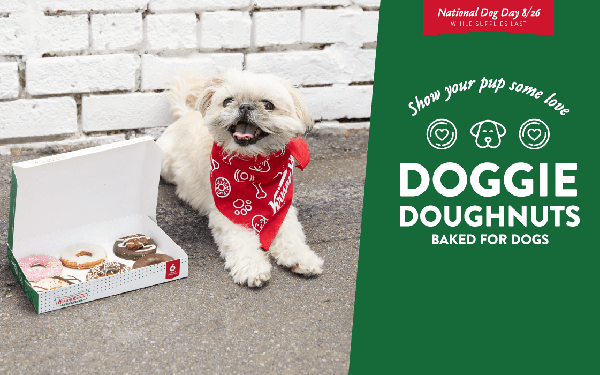 Just in time for National Dog Day (Aug. 26), brands are getting their shout-outs ready with all the canine cleverness America's dogs deserve. Among them: a your-pooch-in-ink tattoo contest, some doggie doughnuts, or a few signs that acknowledge your pet's special skills.

Bark, the creators of BarkBox, is offering 100 dog parents free tattoos of their pups. The contest, announced via TikTok, is designed to commemorate the company's tenth anniversary.

People need to share a photo of their dog and explain why "they are the most deserving of the permanent declaration of love," the company says in its announcement.

SimpliSafe is celebrating with limited-edition yard signs acknowledging the various "protector" roles some dogs have, such as "Madam barks-A-Lot," "A Large But Lazy Dog," and "A poorly trained attack dog."

The signs are free and part of the company's effort to introduce new visual branding.

The security company is basing the effort on a poll of 1,000 U.S. dog owners. While 97% say they feel safer with their dog around, 44% also admit that their dog would more likely roll over for a belly rub instead of barking at an intruder.

And Krispy Kreme is offering limited-edition baked treats for dogs of all sizes at participating stores, including six doughnut-shaped biscuits.

The biscuits are handmade by Huds and Toke, an Australia-based artisan baked pet treat company.

It's also selling limited-edition bandanas covered in a pattern of dogs, bones and doughnuts.

Other brands hoping to wag the dog include Einstein Bros. Bagels, with free doggie bagels all week. And Autotrader, which says the 2022 Chrysler Pacifica, Ford Bronco Sport and 2022 Hyundai Santa Fe top the list of favorite dog-owner cars this year, is doing its best to boost the adoption of shelter dogs. It's steering users to Dogtrader.com, where they can enter their Zip code and find local pooches who need homes.