Psychiatry Drama Is Life-Or-Death Faceoff Between Patient And Doctor 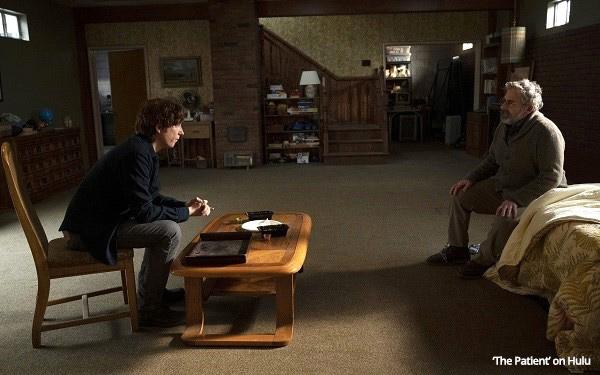 The unusual new Hulu series “The Patient” offers an intriguing premise: A psychiatrist is kidnaped and imprisoned in a basement by a new patient who apparently wants this doctor’s undivided attention.

Specifically, this patient wants the doctor to help him undertake intensive therapy -- in this case, everyday -- aimed at curbing the patient’s compulsive, violent tendencies.

How violent? To reveal that would constitute a spoiler. Suffice it to say, he is a serious criminal, although he has yet to be caught.

The process of therapy under extreme duress is the central plot point that runs through the entire show. The duress is felt by both the psychiatrist, Alan Strauss (Steve Carell), and the patient, Sam Fortner (Domhnall Gleeson) -- both pictured above.

The psychiatrist is tethered to a bed at all times with a heavy chain and is gripped with fear that his kidnaper will attack him at any time.

The patient’s own stress comes from the doctor’s insistence that he be honest and open about his traumatic past and the things he has done.

Their sessions are understandably filled with tension. For that matter, so is the whole show, which may be too intense for some.

At its heart, “The Patient” plays like a two-character play, but one that unfolds in 10 acts (episodes).

The writing of this show’s scenes and dialogue are really the secret sauce that puts this scenario across.

“The Patient” is written by Joel Fields and Joe Weisberg, who are also the show’s co-creators and showrunners. They last worked together on “The Americans” for FX, which is providing “The Patient” for co-owned Hulu (both owned by Disney).

Also a vital requirement for a show like this: Two strong lead actors to take on these complex roles. Carell and Gleeson fill the bill.

“The Patient” premieres on Tuesday, August 30, on Hulu.