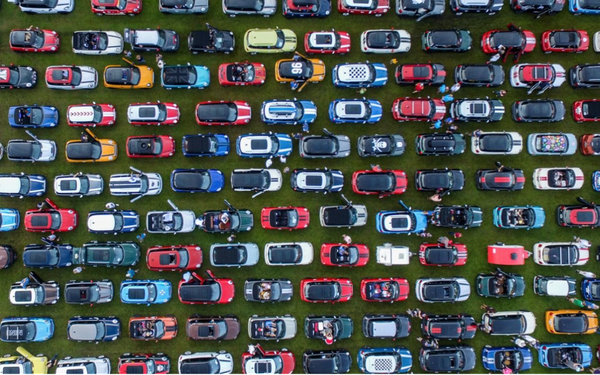 This story ran in an earlier edition.

The pent-up demand the travel industry has been experiencing all summer extends to those making trips to automotive-themed events.

Thousands of owners flocked to Mini Takes The States earlier this summer, coming from all over the world to join with others to drive part or all of the weeklong road rally.

Doug Teulie says he and his wife Kathy — who drove cross-country from Huntington Beach, California to participate in the entire rally, which stretched from Vermont to South Carolina — had planned to attend the 2020 rally before it was cancelled due to the COVID-19 pandemic.

“Most cars today lack personality,” says Teulie, who worked for many years in Toyota’s industrial design studio. “Mini is big on saving animals. I like that Mini is a brand with a heart.”

The BMW brand put together a 5-minute recap video that shows an overview of the event, which covered nine states and 2,000 miles. The brand ended up raising over $90,000 for Best Friends Animal Society.

That event is the week before the annual Woodward Dream Cruise, which attracts an estimated 1.5 million vehicle fans from around the country, many who bring their vintage cars to show off.

Ford Motor Co. had a large presence at the event this year and held several press events, including one where it announced “The Ford Stampede,” a huge owner event that will be held in conjunction with the Detroit auto show.

The upcoming event, officially known as the North American International Auto Show, will be the first one held in Motown since before the pandemic.

The press conference schedule for Sept. 14 is sparse compared to previous years, but the show organizers are hoping by holding it in warm weather and making it an indoor-outdoor event, that more consumers and families will attend. The public show runs from Sept. 17 through Sept. 25.

Finally, the first Detroit Concours d’Elegance presented by Hagerty is scheduled for Sept. 17-18. It will be held downtown at the Detroit Institute of Arts a few miles from the auto show. Event organizers say they hope to attract consumers who will attend both events.

The Sunday competition, similar to the famous Pebble Beach Concours d’Elegance, will feature 120 vehicles competing in 15 car classes. Free ride and drives will be open to the public to give them a taste of classic car ownership.

Like the auto show, the Detroit Concours aims to attract families and includes a youth judging program that will give kids ages 8 to 14 a chance to learn more about classic cars. Children 15 and under are able to attend all events for free.

“The car world is evolving. It’s not exactly the same,” says McKeel Hagerty, CEO of Hagerty during a press event to give details about the upcoming event to media. “Despite what a lot of people think, it’s evolving to involve some of the next generation. Younger people are into cars.”

Stats that indicate that the next generation doesn’t like cars or think they have only transportation value “simply isn’t true,” he says. “A lot of those stats were collected after the financial crisis of 2008-2010, when younger people couldn’t afford cars.”

Now, the oldest millennials are turning 40 and “are starting to buy the cars they always wanted to have,” Hagerty says.