Streaming Subscriber Revenue Projected To Rise 32% By 2024, Slowdown To Follow 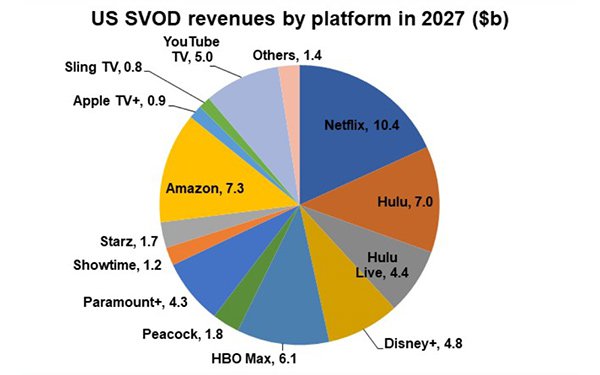 Although U.S. subscription fee revenue from streaming TV platforms will rise 32% over the next two years to hit $56 billion, a slowdown in business will follow, according to Digital TV Research Group.

From 2024 to 2027, subscription revenues will be virtually flat at $57.1 billion due to growing advertising-supported video options from subscription-based services as well as independent AVOD platforms.

In 2027, Netflix will continue to lead when it comes to subscription fees from streaming platforms at $10.4 billion.

Due to an expected shift to its new advertising supported option, however, Netflix will lose $1.4 billion in subscription fees by 2027. However, “Netflix will more than recoup these SVOD revenue losses with AVOD sales,” according to Simon Murray, principal analyst at Digital TV Research.

Competition will be stronger against Netflix over the next five years.

Digital TV Research says Netflix will see a decline in U.S. subscribers, to 63 million subscribers by 2027 -- down by 4 million.

By 2027, Hulu, Disney+, HBO Max and Paramount+ are projected to grow to between 40 million and 50 million subscribers.

In addition, Murray says: “Some consolidation – mergers and closures – is likely.”