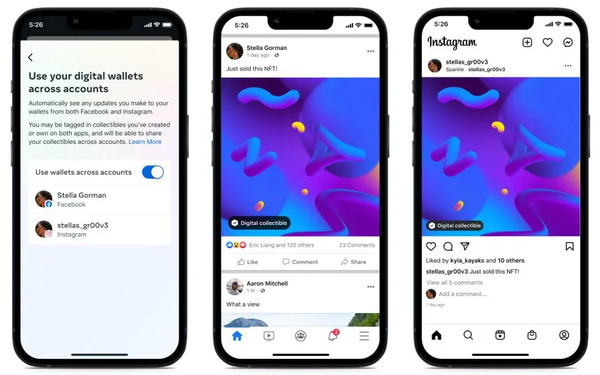 In an updated blog post, Meta said users can also connect crypto-wallets such as Rainbow, MetaMask, Trust Wallet, Coinbase Wallet and Dapper Wallet to Facebook and Instagram in order to post NFTs minted on the Ethereum, Polygon, and Flow blockchains.

The tech giant has been talking about NFT compatibility for some time now. Meta CEO Mark Zuckerberg first announced the future role of NFTs on Instagram in March of this year.

Shortly after, Instagram began officially testing NFTs with select creators, and Instagram head Adam Mosseri said that the company was exploring digital collectible sales as another revenue channel for creators on the platform.

In June, Meta expanded the testing pool and began showcasing digital collectibles on Facebook with U.S.-based creators. The next month, the company launched NFT support on Instagram in 100 countries.

The most recent announcement affects only selected U.S.-based users.

The current NFT market may not be ideal for a move of this magnitude, as trading volume on OpenSea –– one of the largest NFT marketplaces––has dropped 99% in the past four months.

At the beginning of May, OpenSea had over $2.7 billion in transactions, compared to $9.34 million worth this past Sunday.