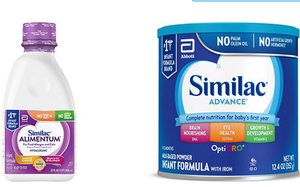 Now that Abbott Laboratories has resumed production of Similac after a product recall, the question is whether the infant formula category and its long-running oligopoly of brands has been permanently disrupted.

Abbott said last Friday it has begun producing Similac at its plant in Sturgis, Michigan following a February bacteria-related recall that was followed by storm damage to the facility—both of which contributed to a massive shortage of infant formula.

In response to the shortage, the U.S. Food & Drug Administration loosened its restrictions on which baby formula could be manufactured overseas and sold in the United States under an “enforcement discretion.”

That has opened the door to several overseas brands in a category long dominated by Abbott, Reckitt Benckiser and Nestle.

Those brands include Danone’s Aptamil—the #1 baby formula in Europe—along with Care A2+ and Bellamy’s Organic from Australia, Kenamil from the United Kingdom and Gerber Good Start Gentle from Mexico.

“Now, the challenge is determining what changes, if any, will be made to federal policy and regulation to prevent similar crises in the future,” Morningstar analyst Diana Radu noted earlier this month.

According to Radu, in 2021 the United States imported “only 1.5% of its estimated domestic demand for infant formula.”

The federal government is largely responsible for the domination of just three companies—owing to strict nutritional values, product testing and labeling, along with high import tariffs.

Then there is the U.S. Department of Agriculture’s Special Supplemental Nutrition Program for Women, Infants, and Children to assist low-income families.

“In order to secure large discounts from manufacturers and provide baby formula to all eligible families, the program awards an exclusive contract to a manufacturer in each state, which has historically translated into a near-monopoly for the manufacturer in that state,” Radu wrote.

“All these factors have served to discourage both domestic and foreign players from entering the market over the last few decades.”

Regarding the FDA’s enforcement discretion—which was set to expire Nov. 4—the agency extended the deadline a bit. It said on Aug. 10 that infant formulas approved under the order that are imported to the United States on or before Nov. 14 can remain on the market.

“The FDA does not intend to require product on the market to be removed after that date,” the agency said.