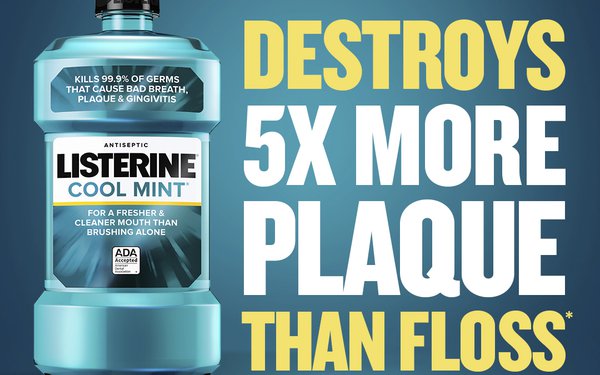 Content from Doner Advertising includes a :15 second spot   that  premiered in prime time Monday on CBS’ “NCIS: Hawaii,” and in daytime this week on NBC’s “Today Show” and CBS’ “The Price is Right” and “CBS This Morning.”

The spot, running through year’s end, combines footage of a satisfied mouthwasher, with animation showing how the product works between teeth. The graphics, like the mouthwash bottle, are colored Listerine’s shade of greenish blue.

“Not flossing well?” says the narrator. “Add the ‘whoa’ of Listerine to your routine. New science shows it gets in between teeth to destroy five times more plaque above the gumline than floss, for a cleaner healthier mouth." The spot ends with Listerine’s tagline of the past year, “Feel the whoa!”

The unheralded actress featured in the ad seems to be a Listerine favorite.  She appeared in a Listerine spot last year when the brand introduced its “Feel the whoa!” tagline, and in a video  already touting the new research last month.

The “Destroys 5X More Plaque” line has also been in use this summer at a Listerine web hub and as part of a rewards program called “Ace Your Next Dental Checkup” in which consumers send in photos of product receipts for points good towards collecting such items as Vudu and Fandango promo codes and Visa Rewards Cards.

Other elements of the new campaign  include a :06 second social spot, digital display and paid search, with media buying handed by J3media.

Digital media will include Yahoo, MSN, Spotify, US magazine, ESPN and Food Network.

Results of the mouthwash vs. floss study, sponsored by Johnson & Johnson Consumer Health, were published in a 13-page article in the June issue of the Journal of Dental Hygiene.

The floss used in the research, by the way, was Johnson & Johnson’s own Reach brand. Whoa! Corporate cannibalization, anyone?