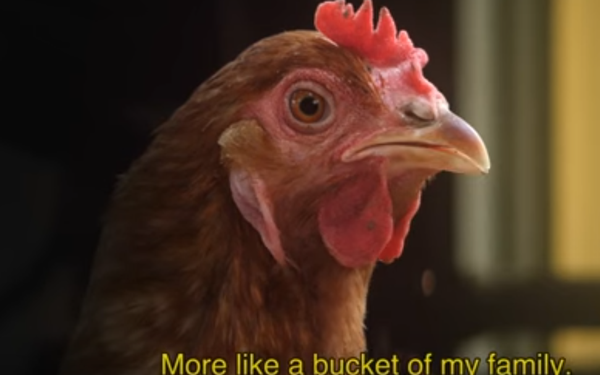 A PETA ad takes on people who regard chicken as a food, rather than a living creature.

The ad announces National Chicken Month, a designation the “speciesist” National Chicken Council created in 1989. In the ad, a focus group of humans are asked what they think of when they hear the word “chicken.”

“Wings,” one woman answers. “Crispy skins,” answers a man in the focus group.

The camera then pans back and we see that the focus group is being observed by chickens, who quip about the human’s answers. When one explains that “I get the family bucket,” a chicken responds (via subtitles) that it’s “more like a bucket for my family.”

Disgusted, the chickens turn on the light to expose themselves to the focus group, who are then horrified.

PETA notes that companies, lobbyists and interest groups killed 9.2 billion chickens in 2021 alone. PETA notes that killing chickens is “entirely unnecessary,” since people can get everything they need from a balanced vegan diet. Eating meat increases one’s likelihood of suffering from heart disease, diabetes, strokes and obesity. “Meat is not a health food,” PETA declares. “It’s a slow poison.”