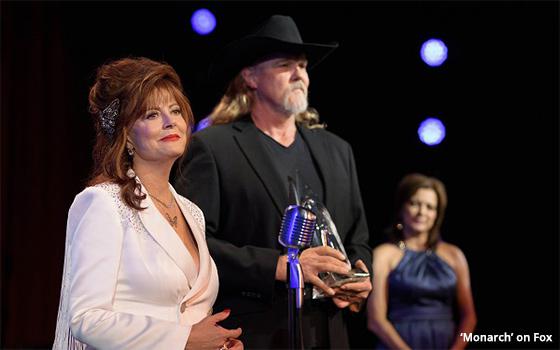 Fox is hoping its new fall country-music drama “Monarch” will earn a boost when it gets a special premiere immediately following NFL football this weekend on the first Sunday of the new NFL season.

It is an appropriate time slot for this scripted show about a fictional country-music dynasty based in Nashville because the subject matter seems tailor-made to appeal to a great swath of the NFL audience.

But the time period is a one-off for “Monarch” since Fox is not about to dislodge its long-running animation lineup on Sunday nights starting with “The Simpsons” at 8 p.m. (starting its 33rd season on September 25).

While it may have benefited “Monarch” to be slotted after Sunday football for the whole season, it will not get that chance.

Instead, it will move into its regular time period, Tuesday nights at 9 Eastern, starting September 20, paired with the medical drama “The Resident” at 8 p.m., returning that evening for its sixth season.

Time will tell whether “Monarch” is compatible with “The Resident” on Tuesday nights, or with Fox prime time in general.

Concerning the latter consideration, “Monarch” plays like a production from the old school of traditional made-for-network-TV prime-time soaps.

By its nature, it seems poised to draw an older audience than most of the other shows on Fox, from “The Cleaning Lady” to “The Masked Singer.”

“Monarch” concerns itself with the travails and secrets of a Nashville family named Roman who are positioned as the country music community’s most hallowed family.

The lead monarch of this Roman empire is a country star literally known as the Queen of Country Music, Dottie Cantrell Roman.

Played by Susan Sarandon, 75, Dottie is styled as a modern-day Loretta Lynn or June Carter Cash, who was the matriarch of a real-life country music dynasty.

Sarandon is clearly the headliner here. And the rest of the cast are clearly working in support of her, starting with her co-star Trace Adkins (seen with Sarandon in the above photo).

He plays her long-time husband, Albie Roman, also a country star but whose career is in a hitless, 10-year dry spell.

Adkins, 60, is on hand more to provide authentic Music City flavor than to act, which is not exactly his strong suit.

He is no match for his leading lady, whose movie and TV career goes back 52 years, including a Best Actress Oscar for “Dead Man Walking” in 1996.

In the premiere episode of “Monarch” that the TV Blog previewed earlier this week, Adkins’ Albie character emerges as a man of few words and few sudden actions.

Directing him to play the character in this low-key way was a wise choice on the part of whoever wrote this character and then cast an authentic country star to play him who is not a professional actor.

Despite this weakness, Adkins manages to give the Albie character a kind of gravitas that implies he is a partner to his wife in the management of a family that is at times dysfunctional and at other times united.

Adkins even holds his own with Sarandon in the biggest scene he is given in the “Monarch” premiere, when he regretfully reveals to her that he had an affair some 30 years previously.

The couple’s children include daughter Nicolette (Anna Friel), who is pushing 40 and seeking to jumpstart a career of her own outside the shadow of her mother; and son Luke (Joshua Sasse), who is CEO of the family music corporation named Monarch.

“Empire” is not only an apt word to describe the Roman family of “Monarch,” but it also happens to have been the title of a Fox series about a hip-hop music dynasty. Broadly stated, the two are very similar.

The pilot episode of “Monarch” crams an awful lot to digest in just one premiere episode, including some kind of terrible misdeed committed by Dottie years ago, a couple of affairs and one family secret that bursts into the open.

This particular secret leads to a sequence of events that is possibly the most ludicrous ever attempted in a prime-time soap like this one, and that’s saying a lot.

“Monarch” premieres on Sunday (September 11) at 8 p.m. Eastern (after NFL football), then has its time-slot premiere on Tuesday, September 20 at 9 p.m. Eastern on Fox.