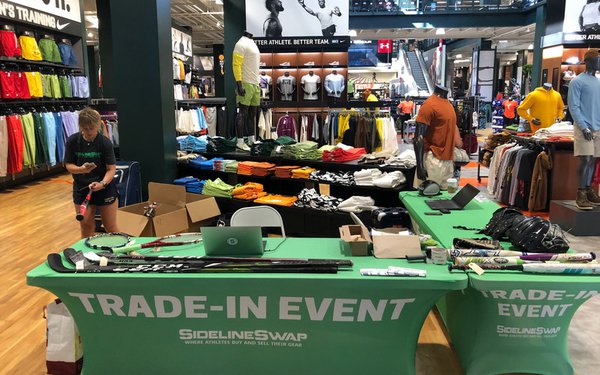 Dick’s Sporting Goods is the latest retailer to move deeper into resale, partnering with SidelineSwap to offer 50 trade-in events in seven states. The Pittsburgh company says the new effort hopes to tap the roughly $580 billion dollars’ worth of shin guards and lacrosse sticks cluttering America’s closets. But it also binds it closer to the brand’s primary purpose–promoting youth sports.

Retail Insider: You’ve already done a few events with SidelineSwap. What did you learn that made you want to expand the partnership?

Peter Land: The events went really well. Re-commerce is an area of growing importance to us. Just about everyone in the sustainability space is looking at re-commerce as both a way to generate revenue, but also help with sustainability goals. And in our case, there’s a stronger need. People who have had kids in sports know how quickly they outgrow things. And there are countless garages, attics and basements full of used gloves and tennis rackets that are in perfectly fine condition. They're just not being used anymore. It’s just a natural fit for us.

Retail Insider: How are customers responding?

Land: It’s such a simple concept, and they like that: one less baseball bat, one less basketball going unused, or worse, into landfill. And they can turn it into a gift card they can use at Dick’s for something they need now.

Retail Insider: So SidelineSwap’s team runs the event, and their personnel evaluate the items? Then list it on their site?

Land: Yes, because that’s not our area of expertise. But on average, the people trading stuff in get a gift card of about $78.

Retail Insider: How does this reinforce Dick’s purpose?

Land: The teammates that work in our stores have a deep connection to community. They know a lot of people who live there–they might sponsor the local Little League team or field hockey team. Seeing customers coming in to trade gear they bought a few years ago, knowing it may end up with a young person who maybe doesn’t have the means to buy a new glove, feels good. It’s not a direct link to our philanthropic effort, which is called Sports Matter. But it’s loosely connected–we want to make sports accessible to all kids, and this helps.

Retail Insider: Young consumers are much more in tune with re-commerce, while older ones are a little turned off by something that feels like thrift-store shopping. Which Dick’s customers are most interested in this swap?

Land: It’s true that in general, younger shoppers are more open to buying used. But in this case, it’s a slightly older cohort–it’s parents who are happy to have a good reason to finally clean out the garage, and see those old roller blades put to good use.

And honestly, we’ve seen customers of all ages respond to our sustainability pillars.

Retail Insider: Such as?

Land: We’ve committed to getting rid of plastic bags by 2025. Almost everybody thinks that's a good idea. But younger cohorts are far more interested in the sustainability of individual products–they want to know what fabric the t-shirts and sweatshirts they buy are made from, and the impact those textiles have. And many of the brands we sell, like Patagonia, Nike and Adidas, are all marching together.

Retail Insider: How about the young people you hire?

Land: When younger people interview, they often say, 'Tell me about your sustainability efforts.’ And they ask very specific questions about what we’re up to.

Retail Insider: How much does sustainability factor into your brand messaging?

I think a lot of companies are wrestling with data, and what it means when consumers say they care about sustainability. What we're learning is that this younger cohort does care. So it makes sense to talk about it a bit more. Look at the media coverage of Biden’s new climate bill–you can’t look away from that and pretend it doesn’t matter to people.

Brands have to understand what's happening in pop culture. And we think of ourselves as a brand that stays current and relevant. The environment is a topic of great interest.

Retail Insider: A few weeks after the Parkland, Florida school shooting in 2018, Dick’s announced it would no longer sell assault rifles. It generated so much heat–both pro and con. Does that impact you, as an employer brand? Is it on the minds of Gen Z job applicants?

Land: Yes. They remember it like it was yesterday. It's very relevant, very current. And if we had to, we would make that same decision today, we would do the same.