Judge Dismisses Trump Suit Against Clinton, Neustar, Others: Calls It Political, Not Legal 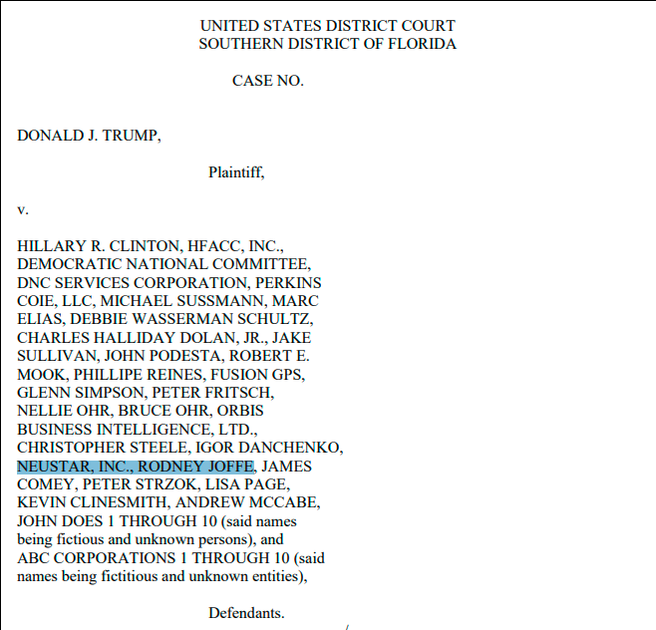 A federal judge has thrown out former President Donald Trump's sprawling lawsuit alleging former Democratic Presidential nominee Hillary Clinton -- and dozens of others, including ad-tech company Neustar -- conspired to undermine his 2016 presidential campaign by falsely accusing him of colluding with Russia.

In a 65-page ruling issued Thursday, U.S. District Court Judge Donald M. Middlebrooks said the core problem with Trump's lawsuit is that his complaint is political, not legal.

“Plaintiff is not attempting to seek redress for any legal harm; instead, he is seeking to flaunt a two-hundred-page political manifesto outlining his grievances against those that have opposed him, and this court is not the appropriate forum,” Middlebrooks wrote.

The decision comes in a complaint brought by Trump in the Southern District of Florida in March, when he alleged that Clinton, Neustar and others “nefariously sought to sway the public’s trust,” through “a far-reaching conspiracy ... designed to cripple Trump’s bid for presidency by fabricating a scandal that would be used to trigger an unfounded federal investigation and ignite a media frenzy.”

Among a host of unproven accusations, Trump claimed that Neustar -- which allegedly provided domain name service resolution services to the Executive Office of the President -- mined that traffic in order to gather derogatory information.

The complaint also alleged that another defendant in the case, Michael Sussman -- a cybersecurity attorney who had worked for the Democratic National Committee -- commissioned Neustar to “hack servers from highly-sensitive locations” including Trump Tower and the White House, in order to “uncover proprietary data that could then be manipulated to give the impression that Trump was engaged in illegitimate business with a Russian bank.”

Based on those allegations, Trump claimed that Neustar violated the Computer Fraud and Abuse Act, an anti-hacking law that prohibits anyone from accessing computer servers without authorization.

Middlebrooks disagreed, essentially ruling that even if Trump were able to prove that Neustar mined data, doing so wouldn't support the claim that the company violated the Computer Fraud and Abuse Act.

“There is no external hacking alleged,” the judge wrote.

He added that the federal statute “prohibits unauthorized access to a computer, not misuse of information obtained therefrom.”