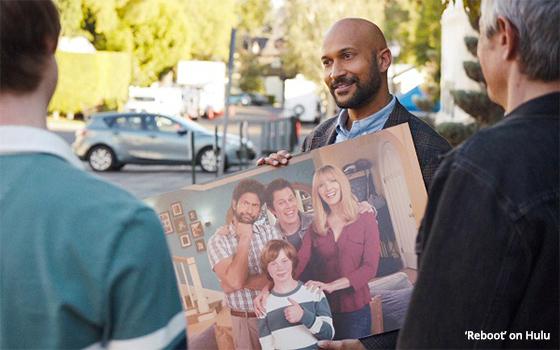 Once again, Hulu demonstrates that it is king of the TV universe when it comes to comedy.

The latest evidence comes Tuesday with the debut of “Reboot,” a comedy of such high quality that it gives a jaded TV critic hope that TV comedy might be ready to shake off the unfunny doldrums that have plagued it for the better part of a decade.

“Reboot” is hilarious, fast, smart, well-cast, well-acted and written with the kind of panache that we have not seen since “Modern Family.”

Low and behold, “Reboot” is from the same guy -- the great Steve Levitan -- who co-created “Modern Family” (with Christopher Lloyd). He created “Reboot” and runs the show.

“Reboot” is a satire of television, but comes so close to the real thing that it is possible to believe it is real, not satire.

Like “Modern Family,” “Reboot” is shot in the one-camera method, but it is not positioned as a pseudo-documentary.

“Reboot” is about a plan to revive a family sitcom that was popular on network television 20 years go. The show is, or was, called “Step Right Up!”

The revival has been cooked up by a TV writer played by Rachel Bloom. For her new/old show, she envisions reassembling the original cast.

But instead of presenting them as perfect parents and people as in the old sitcom, she proposes that the new version will stand the old image of the warm, family sitcom on its head.

Instead of doing everything right, the family members in the new “Step Right Up!” will often be wrong. They will also harbor dark secrets that will be revealed comedically.

This show’s leading cast members are Keegan-Michael Key (pictured above) as a sitcom husband, Judy Greer as his wife, Johnny Knoxville as their friend, and Paul Reiser as the original producer of “Step Right Up!”

He still owns the show, and intends to insinuate himself in the production of the new one -- input that is entirely unwelcome.

The whole thing is remarkably believable. Hulu even permits a letter-perfect send-up of itself and the process by which it chooses its shows (in a fictional way, of course).

This happens early in the first episode of “Reboot” as the TV writer meets with Hulu's head of programming and a group of sycophants who are locked in a life-and-death struggle with each other to out-flatter their boss.

Another nice touch: Each episode of “Step Right Up!” is titled with the name of another, real-life sitcom, including “New Girl,” “Growing Pains” and “Who’s The Boss.”

In fact, everything about this show is letter-perfect. It is a front-runner to top our list of the best new shows of 2022 when the TV Blog presents its list in December (I know, everyone can’t wait for that, right?).

As for the assertion above that Hulu right now is the king of TV comedy, this assertion comes from no less an authority than the TV Blog itself.

To name a few, these include “Ramy,” “Woke,” “The Bear” and, most recently, “This Fool.” Hulu subscribers also like “Only Murders In The Building.”

In conclusion, by the power invested in me, I hereby officially declare Hulu to be the best destination anywhere for TV comedy.