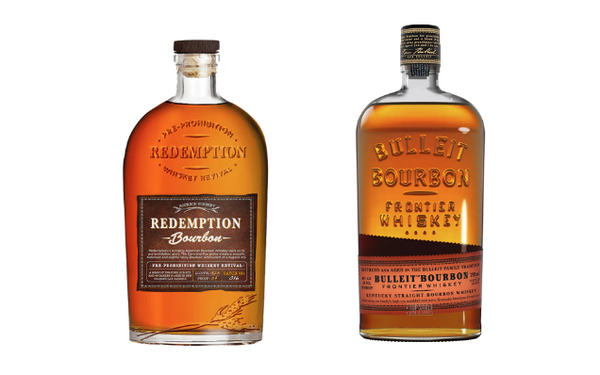 Trademark litigation involving the brands Bulleit and Redemption is aging longer than most bourbons.

Specifically, it's been more than five years since a legal proceeding was brought by Bulleit bourbon and whiskey marketer Diageo North America against Deutsch Family Wine & Spirits over the design of its Redemption whiskey bottle.

When Diageo filed suit in June of 2017, the company said the Bulleit design mark and trade dress “are inherently distinctive and non-functional and have come to be associated exclusively with Diageo and identifying the source of Diageo's products."

Diageo also noted that Redemption’s whiskies had been sold in cylinder-shaped bottles but that Deutsch “revised the bottle and label design for Redemption whiskey products to closely mimic the distinctive appearance of Diageo’s Bulleit.”

Among other responses, Deutsch introduced evidence showing a range of bottles and combinations of the same pocket-flask shape and similar trade dress to the Bulleit bottle.

In June of this year, a jury in New York decided that the design of the Redemption bottle did not infringe on Bulleit's overall trademark rights, but that the design did dilute its “distinctiveness.”

Diageo had sought $21 million in damages but was awarded nothing.

Earlier this month, a judge in New York granted an injunction sought by Diageo and denied Deutsch’s request for a new trial. The injunction bans the advertising, promotion and sale of Redemption in its current flask-shaped packaging.

In a statement reported by Whiskey Raiders, Deutsch said that distributors and retailers are allowed to sell all of their current Redemption inventory while the injunction is in place.

Deutsch is appealing the judge’s ruling.