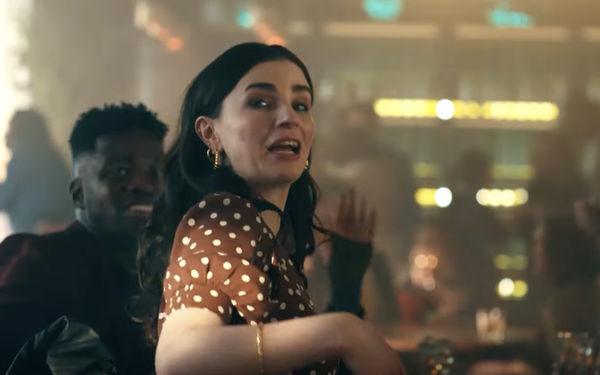 The best way to widen your circle of friends is over a glass of Irish whiskey—even if they don’t have a brogue.

That’s the advice from Jameson in the first major campaign in more than a decade for the world’s #1 Irish whiskey.

And yes, there is a brogue involved, because the Pernod Ricard brand has tapped Irish actor and comedian Aisling Bea to spread Jameson’s new “Widen The Circle” platform internationally.

Bea’s credits include creating and starring in the BAFTA-award-winning show “This Way Up” and performing in Netflix’s “Living With Yourself.”

Fittingly, the first campaign spot from TBWA\Dublin was shot in a pub to depict spontaneous moments when people can find their kindred spirits.

It opens with a standup comedian bombing with everyone in the audience except for one woman who raises her glass in response.

The scenes shift to a house party and outdoors get-togethers before Bea appears in a pub and welcomes to her table a singer from the band that’s performing.

“And always ask them to pull up a chair,” Bea says into the camera. “Just don’t drag it!”

According to Jameson senior brand director Kelly Suhr, the best times are when we open ourselves up to new experiences that spark a connection, a new friendship, or create a life-long memory.

“As an Irish actor, Aisling is a nod to our Irish heritage—and as a comedian and writer she was the perfect fit for the tone we wanted to strike,” Suhr tells Marketing Daily.

“We are, after all, the serious whiskey that doesn’t take itself too seriously.”

Distilled in Ireland, Jameson has been around for 240 years.