Eloquii Says 'I Do' To Plus-Size Bridal 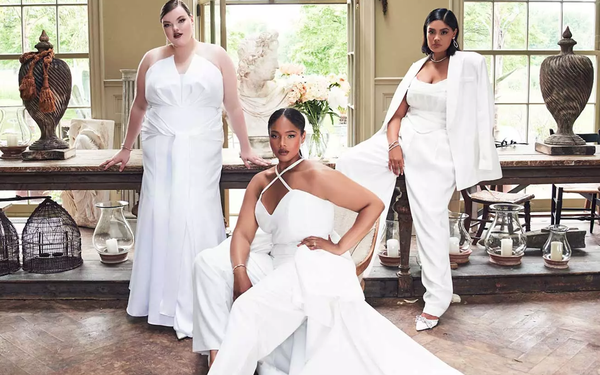 Eloquii, Walmart’s plus-size D2C brand, wants to help more brides into the dress of their dreams, introducing its first-ever wedding wear collection. It’s aimed at every event of the process, with outfits for everything from the bachelorette party to the rehearsal to the main event -- all priced at less than $900.

This latest bit of shape-shifting from Eloquii comes at an interesting time. On one hand, it hits as the bridal business shows no sign of slowing, with the wedding world still racing to accommodate all those COVID-19 delayed nuptials. Bridal fashion is earning a growing slice of that pie, worth about $26 billion in the U.S.

Still, the collection launch also comes at a discouraging moment for plus-size fashion. For years, body-inclusivity efforts appeared to be winning, with larger sizes appearing everywhere -- on runways, in advertising -- and, most importantly, on store shelves.

Not only do plus-size shoppers account for roughly 70% of all women consumers, but their spending has also grown at a blistering rate. NPD Group recently reported that sales of women’s plus-size apparel grew by 18% in 2021 compared to 2019, about three times faster than spending in the remaining women’s market.

But there have been significant setbacks. After less than a year, Old Navy has scaled back its size inclusivity, conceding it launched too broadly and quickly. Loft eliminated its plus-size line last year.

And the push to incorporate more plus-size models during New York Fashion Week also appears to be fizzling. Fall shows this year had 51 plus-size model appearances, reports the Fashion Spot, which accounted for 5.09% of total castings. That’s a slight increase from spring 2022, which had 48 plus-size appearances, or just under 4%. Those numbers are still significantly below the 68 appearances in 2020.

Eloquii continues to be an important player. First launched by the Limited in 2011, it folded soon after, and was resurrected as an ecommerce company by a group of employees in 2014. In 2018, Walmart acquired the company, reportedly for $100 million.

The company operates separately from the Bentonville, Arkansas-based giant. But in 2020, it introduced Eloquii Elements, a private-label pus-size line sold in Walmart stores.

d2c, ecommerce, fashion
1 comment about "Eloquii Says 'I Do' To Plus-Size Bridal".
Check to receive email when comments are posted.
Next story loading