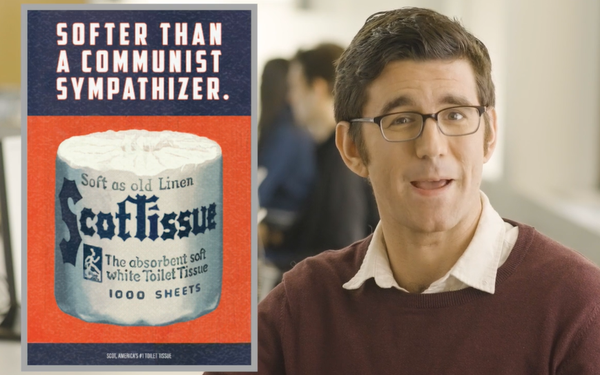 The Gate, which says it’s the second oldest advertising agency in North America (behind J. Walter Thompson), is celebrating 150 years in business through a tongue-in-cheek advertising campaign apologizing to former clients that fired the shop for bungled work.

Scott toilet paper is one example. An agency spokesman in the Scott spot notes that the shop (founded in 1872 by Albert Frank in New York) did work for the client in the 1940s and 1950s.

“Who could forget the ‘War is Rough, Toilet Paper Shouldn’t Be’” poster,” says the spokesman. “Or the ‘Softer Than A Communist Sympathizer’ campaign. America Loved them.”

But then came the “Number One Brand For Your Number 2s” billboard and “the you-know-what hit the fan. You had to fire us.”

But the spokesman asserts that the agency has changed. “We believe in your product. We use your product. And if you visit our office, we’ll take to you to the bathrooms and prove it.”

More examples from the 150th anniversary campaign can be seen here and here. The apologies, also made to brands such as Cartier, Borden Milk, Cunard Luxury Cruise Lines and McCormick Spices, come in the form of short films which will be hosted on The Gate’s website and social channels. Each film outlines the ‘story’ behind the agency-client fallout and assures the brand’s current marketing teams that lessons have been learned.

For example, in a message to Buitoni Pasta, The Gate apologizes for their work on the brand in the 1960s, which accidentally made Americans believe that the business had ties to the Mafia. For Borden, The Gate apologizes for an ad campaign it created 80 years ago, admitting that launching the ‘Lucy the Lactose-Intolerant Cow’ mascot may not have been the wisest decision when Mad Cow Disease was gripping the nation.

The Gate, still based in New York, is now part of London-based global creative and tech group MSQ, and has offices in San Francisco, London and Edinburgh. Current clients include State Street Global Advisors, Nasdaq, BHP, Crowdstreet and National Grid.