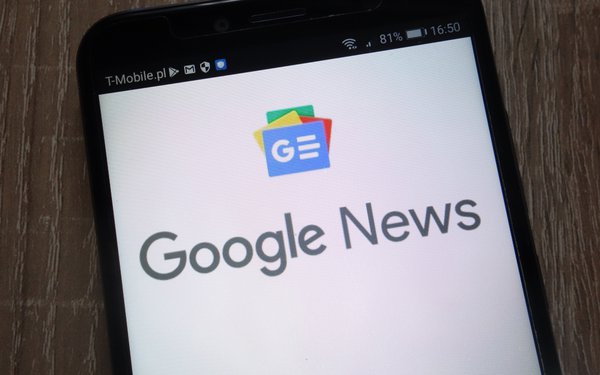 When it comes to news on digital platforms, Google is the most-trusted in both the U.S. and U.K. (trusted by 53% and 52%, respectively), while TikTok is the least-trusted (20% in both countries).

That’s according to the latest in a series of studies probing people’s trust in news conducted by the Reuters Institute for the Study of Journalism. In this case, the researchers surveyed 2,000 people in the U.S., U.K., Brazil and India about how they feel about news on digital platforms.

Levels of audience trust in news on social media, search engines and messaging apps was consistently lower across all four countries than trust in information in the news media more generally.

Google was the biggest exception in the U.S. and U.K., coming in about on par with news sources overall — although it fared somewhat less well in the other two countries. (See charts summarizing results at bottom of this article.)

The growing importance of search engines for news brands is one key insight drawn in the report.

"Audiences do perceive news on different platforms differently and say they use them for sometimes distinct purposes," write the authors. "That insight is an important one for news organizations that seek to engage with audiences in these spaces. The degree to which audiences may be more trusting of news on Google, for example, may point to the enduring importance of search engines in particular as spaces for exhibiting news content, even as social media and messaging apps have attracted relatively greater attention in recent years. Very different forms of news are likely to connect with audiences on search, where users are more likely to be seeking out information, than in social media spaces, where news may be seen as more of a distraction."

The report was written before TikTok's most recent efforts to accelerate its use as a visual search engine, which concerns some critics, given the potential for misinformation on TikTok and U.K. fines against it for alleged mishandling of children's data.

Other insights from the study, as summarized by the Institute:

Despite comparatively lower trust in news on platforms, many users hold broadly positive feelings toward them.

Much of the trust gap between digital platforms and the media in general is explained by lower levels of trust among people who do not use platforms.

“Many of the same people who lack trust in news encountered through digital media companies — who tend to be older, less educated and less politically interested — also  express less trust in the news regardless of whether found on platforms or through more traditional offline modes,” writes the Institute.

People report using most platforms more for connecting with others or entertainment than for news — although about half in all four countries say they get some news online every day. The majority in some countries also say they use platforms for buying or selling products or for work or school.

Relatively small numbers of respondents in all four countries expressed negative feelings toward the technology companies, perhaps reflecting that their perceptions of the companies have relatively little to do with news content.

Many of the most common reasons people say they use platforms have little to do with news. For most platforms, people are more likely to say they use them to connect with other people in their lives or for entertainment or to pass the time rather than to find out information about current affairs. The majority in some countries also say they use platforms for commercial purposes (buying or selling products) or for work or school.

Rates of trust in news in general are comparatively higher than trust in news when it pertains to coverage specifically of politics.

As many as 20% to 30% of the most politically interested people in all four countries say they have stopped talking to someone on one or more digital platforms due to disagreements about politics.

As many as half in all four countries say they believe journalists try to manipulate audiences to serve the agendas of powerful politicians or care more about getting attention than reporting the facts. However, because news is not central to most people’s experience using platforms, rates are not necessarily higher when compared to other sources of news.

Despite positive feelings toward most platforms, large majorities in all four countries agree that false and misleading information, harassment and platforms using data irresponsibly are “big problems” in their country for many platforms. 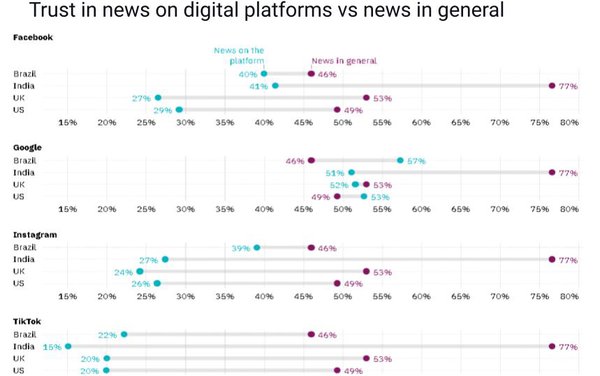 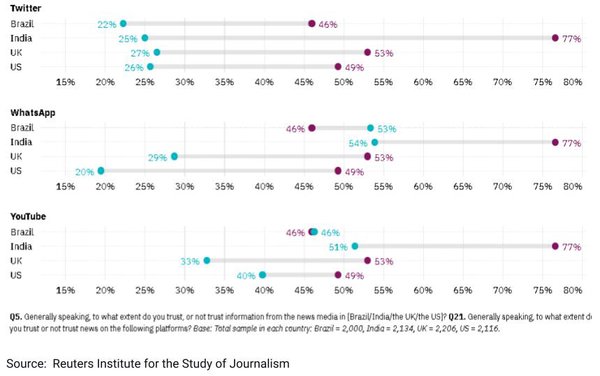