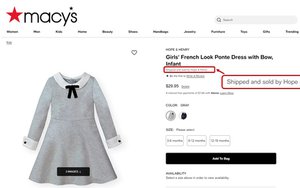 In the latest twist on "What exactly is a retailer, anyway?" Macy's is introducing a digital marketplace (officially called Marketplace) on its website. The new platform, which it first mentioned last year, offers a "curated assortment of new brands, merchandise categories and products."

That's what all ecommerce sites offer. What makes this different is that the items are sold not by Macy's but by third-party merchants and brand partners. Macy's says the launch is a logical next step as it establishes itself as an omnichannel retailer.

Marketplace is also an example of how fluid retail business models have become. In one sense, it takes Macy's a few steps closer to an Amazon model of ecommerce. It will deliver the much-larger assortment shoppers have come to expect from online shopping platforms.

Yet it's also a few steps closer to what department stores used to be, adding 20 product categories with 400 new brands.

The New York-based company has been working on the platform for a year. "Seamlessly integrated into Macy's digital shopping experience, Marketplace gives our customers access to an array of expertly curated products — from apparel and beauty to home improvement, toys, pet products and more," said Matt Baer, chief digital and customer officer at Macy's, in the announcement.

Product categories include electronics, with big names like LG and Samsung; beauty and wellness, with L'Occitane and Mary Ruth's; and toys, with Magna-Tiles.

Once upon a time, department stores did offer many more categories. There was a toy department, a shoe department, and plenty of floor space devoted to appliances, electronics and home design.

But in the last few decades, ecommerce and specialty retailers chipped way at those offers. By adding them back through this marketplace, Macy's can reassert the breadth of its assortment. And by curating the selection, it can -- one hopes -- avoid the "endless aisle" dreariness of other sites.

It's an uneasy balancing act. Last fall, activist investor Jana Partners wrote a letter to Macy's board, urging it to spin off its e-comm business, as Hudson's Bay Corp. did with the ecommerce arm of Saks Fifth Avenue.

Those deals make plenty of sense from a stock market point of view. Ecommerce businesses are fast-growing, while department stores are in decline.

But for omnichannel retailers, the ecommerce part of the business model is the essential ingredient.

At that time, Macy's hired an advisor to study Partners' proposal. In February, the retailer said it had considered the idea of a spin-off and rejected it.

"We are more confident in our path forward as one integrated company," said CEO Jeff Gennette in its announcement. "The Board's review reaffirmed our conviction that we are pursuing a robust strategy, and it provided us with greater clarity on several initiatives that could be further accelerated to unlock additional value for our shareholders, which we are pursuing."

In today's news, Macy's says online and mobile users will likely feel only "minimal differences" in the marketplace shopping experience, beyond a notification that a third-party seller will ship the item.

It also says the effort will increase its commitment to diversity, with 20% percent of marketplace sellers and brands from underrepresented enterprises.