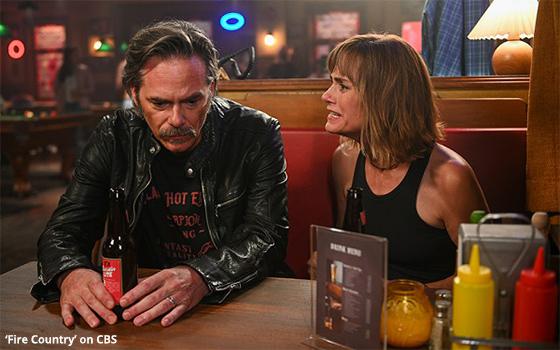 With the fall new drama “Fire Country,” CBS adds a firefighting drama to a prime-time lineup that is heavy on law enforcement, but light when it comes to fire-and-rescue shows.

NBC has “Chicago Fire” and Fox has its two “9-1-1” shows, but CBS’s new fire entry exists far away from the urban locations of those emergency-services dramas.

“Fire Country” is a drama about forest fires in and around a small town in California that is said to be 200 miles north of San Francisco.

“Fire Country” starts this coming Friday (October 7) in the 9-10 p.m. Eastern slot on CBS, sandwiched between two stalwart action-oriented dramas -- “S.W.A.T.,” returning for its sixth season that evening, and “Blue Bloods,” returning for its 13th season.

“Fire Country” should fit right in. The show has a similarly macho feel, although, as in real life, the firefighters in the show are men and women. Suffice it to say that all of them are rough and tough, always courageous and at all times professional.

But there is an added wrinkle here. Some of the firefighters are furloughed convicts from nearby prisons on a work-release program from which they hope to shave years off of their sentences or even earn parole.

The cons are brought in because the brush and forest fires have become so big that the fire departments who are tasked to fight them now find themselves undermanned.

In the premiere episode of “Fire Country,” we learn the various backstories of the main characters -- most notably a convict who is surprised to learn that his firefighting furlough will bring him right back to the small town he came from.

He has unfinished business there and, not surprisingly, close ties to some of the townsfolk. In the “Fire Country” pilot, we gradually learn about his past relationships, along with all the other backstories, secrets and interlocking family ties that characterize this entire town.

As happens sometimes with shows like this, the various subplots tend to pile up so much that one begins to get the feeling that the show could do without a couple of them, if just for the sake of simplification.

In “Fire Country,” all of the background linkage between characters reminded me of a bulletin board in which police detectives post photos, clippings and other evidence and then connect them all with so much twine that the whole thing looks impossible to untangle.

But when all is said and done, a firefighting drama series lives and dies on the quality of its action scenes.

The raging fires and the fierce, urgent battles to contain them in “Fire Country” are the best features of the show.