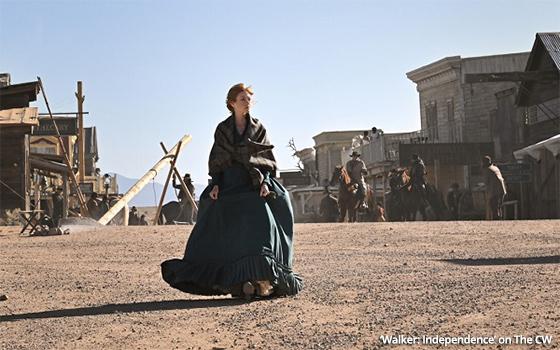 A stranger nobody knows wanders into a Wild West town from the dusty wilderness hellbent on revenge.

No, it is not a Clint Eastwood movie. It is a new western series coming to The CW on Thursday.

Titled “Walker: Independence,” the show has something to do with “Walker,” the CW series about a modern-day Texas lawman that was rebooted from the old “Walker, Texas Ranger” starring Chuck Norris.

Moreover, Ms. Walker, pioneer woman, has no way of knowing about the present-day “Walker” because “Walker: Independence” takes place more than a hundred years ago in the 19th century, when great swaths of the American West were not yet tamed by the arrival of law and order.

The two shows are linked on the CW’s prime-time schedule, however. “Walker” starts its third season Thursday night as a lead-in to “Walker: Independence.”

In “Walker: Independence,” we learn that Ms. Walker has left the civilization of the East with her husband because he has accepted a job offer to become the sheriff of the Texas town referenced above called Independence.

But he doesn’t make it. He gets shot to death out on the prairie in the premiere episode’s opening sequence by an assailant or assailants unknown.

So, what is Ms. Walker to do? Suffice it to say that in the first episode of “Walker: Independence” her intentions are clear, but they are not very well-thought out.

As a result, viewers will not get to experience the satisfying, hoped-for payoff that comes with these kinds of revenge stories. Instead, her revenge story seems as if it will drag on at least until Episode Two and possibly longer. Alas.

As a 19th-century prequel of a series set in the present day, “Walker: Independence” appears to be taking a page from “Yellowstone” on Paramount Network and Paramount+.

That series spawned its own 19th-century prequel called “1883.” Paramount Global owns the Paramount TV brands, and up until the other day, it was the majority owner of The CW, which was sold to Nexstar in a deal that closed earlier this week.

As for “Walker: Independence,” the title has a double meaning. It refers to the name of the freewheeling town that Ms. Walker wanders into, and also to her own embryonic sense of independence as she learns how to fend for herself for the first time.

“Walker: Independence” premieres on Thursday (October 6) at 9 p.m. Eastern on The CW.