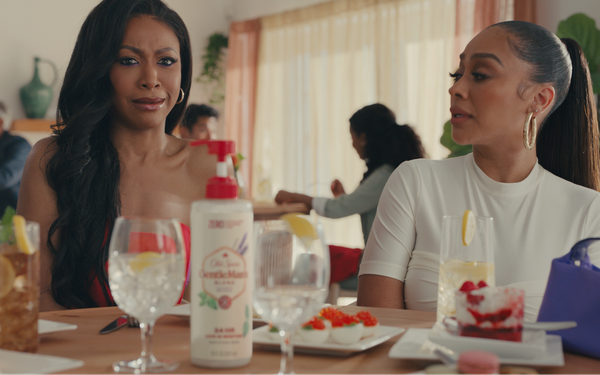 Anthony joins Deon Cole and Gabrielle Dennis in the latest from the “Men Have Skin Too” campaign. In this chapter, the third installment of the campaign, Cole strides into a hotel restaurant, angrily confronting the women for using up his GentleMan’s Blend Body Wash with Lavender and Mint.

Old Spice plans to continue the campaign, launched in 2019, into 2023 with an additional spot featuring Anthony.

It can be challenging to keep an old campaign with essentially one gag going. Matt Krehbiel, Old Spice’s vice president, says the key is making the characters believable. Since 2019, the company's gotten “a wonderfully positive response from people enjoying the humor. Part of the positive praise was due to people being able to personally relate to the characters and storyline,” he tells Marketing Daily via email.

“With each chapter, we continue raising the bar on the campaign’s relatability.”

This spot focuses on the new Gentleman’s Blend body wash with lavender and mint, a formulation that stems from customer feedback. “We heard from guys that they felt grooming products did not have the same premium ingredients and benefits typically found in women’s products. That’s why Old Spice GentleMan’s Blend is crafted with science-backed formulas and expert blends of light, gender-neutral scents.”

Old Spice says it is also working on getting more representation behind the camera. Dime Davis, best known for her work on “A Black Lady Sketch Show” and “Boomerang,” directed the new ads.

Wieden + Kennedy is the agency.

Old Spice is also reconsidering how best to represent Asian consumers. It recently introduced a spot starring Ross (“13 Reasons Why” and “Riverdale”) Butler, playfully introducing an involved mother obsessed with her son enjoying the “finer” things in life and marriage.

The ad is intended to depict a more traditional Asian cultural point of view. Research finds that two-thirds of Asians think there is not enough representation of their cohort on TV, and that much of the portrayal of their identity is inaccurate.