Tinder: Get A Date, Learn To Vote 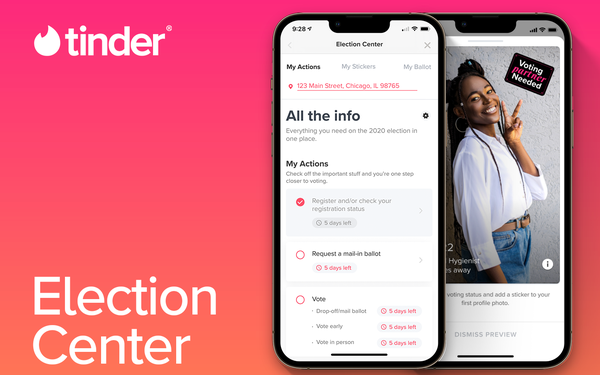 Voting can be as overwhelming as dating. So Tinder is launching a new Election Center inside its app, guiding singles to voter registration resources, polling stations and breakdowns of local ballot measures.

“Voting is also about finding the right match,” says Melissa Hobley, Tinder’s chief marketing officer, in an email to Marketing Daily. “As a brand rooted in creating meaningful connections by enabling members to express their authentic selves, we are committed to empowering our members to use their voice for change.”

Hobley says the effort stems from political frustration and confusion in its core audience. Among Gen Z, which makes up 50% of Tinder's base, 67% say they are less than happy with the current state of politics.

“Tinder members are engaged in politics in general and care that their potential partner is too,” she says, with 59% saying it is important that someone they date is politically informed. And 53% say that regular voting makes a potential match more attractive. Conversely, 47% say finding out the person they’re dating is a non-voter is a dealbreaker.

This cohort also also needs voting help. Tinder’s research  reveals that among singles between 18 to 25, 63% say they find information on ballots overwhelming. And 33% admit they don’t feel adequately informed about the issues, with 70% saying voting should be easier to understand.

Tinder is sending in-app promotions and push notifications to members, steering them to the election. “Members in battleground states are also receiving personalized in-app promotions, educating them on the importance of voting in their local elections and how much their actions can impact the results in their community,” she says.

Once they’ve voted, members can add "I Voted" stickers to their profile, encouraging potential matches to do the same.

Tinder, owned by Match, has been running voting efforts before elections since 2016. Its data is based on a survey conducted by the Harris Poll of more than 2,000 adults 18 and older.