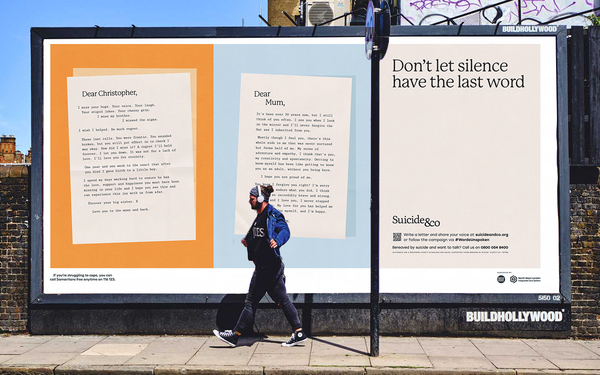 The pain of those impacted by suicide is intense. To support them, the British charity Suicide&Co. has created a new campaign, “Words Unspoken.”

The work was done in partnership with the Harbour agency.

The campaign is augmented by out-of-home billboards that run nationwide, including many Clear Channel’s Platform for Good sites. It also appears on social channels and the Suicide&Co website.

Real letters, written by those bereaved by suicide, anchor “Words Unspoken.” The letters help express emotions and the grieving process.

Amelia Wrighton, CEO-cofounder, Suicide&Co, said: “The campaign is also a form of support in itself, as letter writing is a therapeutic action, enabling people to unlock and acknowledge their feelings. Through hosting the collection on our website we are encouraging people to read other's experiences, reminding us all that we are not alone.”

The ads carry the message “Don’t let silence have the last word.” Others can submit their own letters via suicideandco.org or using the hashtag #WordsUnspoken.

It is estimated that one in five people worldwide are impacted by suicide.

Grant Parker, creative partner, Harbour, added: “We wanted this campaign to show the many nuanced forms of grief these people experience. By boldly showing these letters on large format posters, we hope it will chip away at the stigma those bereaved by suicide often feel and help the millions of people who are affected every year know they are not alone.”