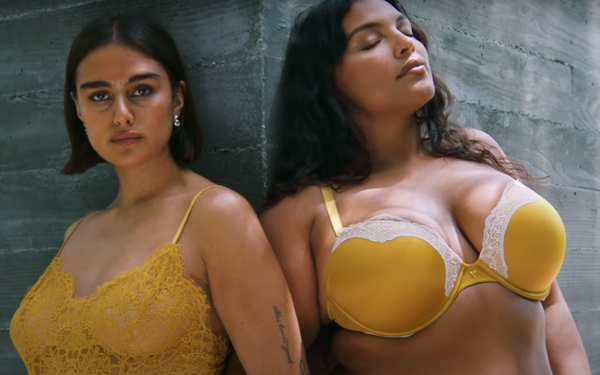 Victoria's Secret comeback keeps building steam. The company now says it's got a plan for fending off the onslaught of D2C companies that have been stealing its share, leveraging its mall-based stores to boost its omnichannel business. And it's got new evidence that its ongoing rebranding -- arguably one of the most complex turnarounds of the last decade -- is winning with comfort-craving consumers.

Chief executive officer Martin Waters told attendees that the company's goal is to be the world's leading fashion retailer of intimate apparel, building on its still-No. 1 position in the domestic intimates category.

To achieve that growth, the company intends to strengthen its core offers, increasing market share in bras, intimates and beauty. And it will continue to evolve brand positioning to be more inclusive, with compelling storytelling in stores and digital.

It's also igniting growth through international expansion platforms and increasing agility through investments in its omnichannel foundation.

In reviewing positive progress made in the last 15 months, Waters also offered candid assessments of just how deep its troubles were, referring to 2016 to 2019 as a series of "execution missteps."

In that time frame, the brand reportedly shrank from a 32% market share to 24%. Waters called out its drifting away from the customer, some fashion faux pas and underinvestment in digital and overinvestment in physical stores.

He also acknowledged the damage of "distracting" management changes. (As a refresher, those included the departure of both its alleged sexually harassing CMO Ed Razek and Les Wexner, the brand's chairman and founder, who had a long friendship with Jeffrey Epstein, the late financier and noted sexual predator.)

Waters also faulted its brand positioning, “that frankly made us show up in a way that was tone-deaf and culturally inappropriate," he told investors. "Our job now is to rebuild the foundation."

That includes a "Brand Revolution," at least partially based on insights gleaned from VS Collective, a group of women who will advise it about imagery that's "culturally relevant." Designer Stella McCartney, for example, is on board to offer advice on brand positioning in breast cancer awareness.

Much of its new approach to imagery -- featuring photos of women of many body types, ethnicities and ages -- has been in place for the last eight months. "We know that it's working," he says, "from the way that social media is responding and the way that the consumer is responding to our stores and our digital channels."

Waters said that changes include revamping the brand's ability to create entertainment content, including a comeback of fashion shows. "It's an outstanding equity and one that we can use to our advantage. We just need to do so in a way that's culturally relevant. We have a better opportunity than anybody in specialty retail to create entertaining content for [our customers]."

The brand's fall from grace also stemmed from consumer shifts in product and shopping preferences. Women began craving comfort over lacy bits, with brands like Aerie stepping in to answer the bralette craving. They also turned to online shopping, enticed by highly-successful D2C brands that include ThirdLove, AdoreMe and MeUndies.

Victoria's Secret is fighting back, Waters said, using its 800 stores in the U.S. as distribution centers for digital orders.

"And we are only just beginning to unlock the benefits of AI-driven commerce -- and that opens up an enormous area of opportunity for us," he says, citing its 77 million Instagram followers and 45 million people on Facebook.

After a period of decline, the brand's customer file of 21 million is growing again.