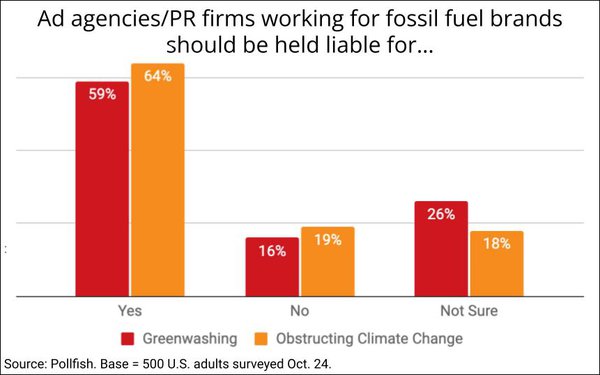 At a time when the ad industry is coming under fire from regulators, advocacy groups and grassroots organizations for helping fossil fuel companies greenwash their reputations and/or obstruct climate action, a majority of consumers believe it should be held liable for that role.

That's the finding of a survey of U.S. adults conducted Monday by Pollfish for MediaPost.

The survey, which was fielded in response to recent Congressional hearings on the subject, as well as an Institute for Advertising Ethics (IAE) informational webinar to help the ad industry benchmark potential threats related to its role promoting fossil fuel brands, found Americans are more concerned about the ad industry's role in obstructing climate change than simply greenwashing fossil fuel company reputations.

Asked how they view the ad industry's claims that it is now working on efforts to decarbonize the planet, only 16% of Americans said they believe that is "authentic," while 39% said it should be regulated, 30% called it "hypocritical," and 15% believe it should be held criminally liable.

"The American consumer is ahead of the industry on this, with its usual abundant common sense," said IAE COO Andrew Susman, after seeing an advance copy of the survey results, which included other findings that will be published later this week.

"Now it is up to the industry to stand up and make that common sense its prevailing practice. Time is running out for players that are all Hat, No Cattle."

The IAE plans a second webinar at a yet-to-be-determined date in December to provide a framework for advertisers, agencies and PR firms to mitigate the potential liabilities of greenwashing fossil fuel brands. 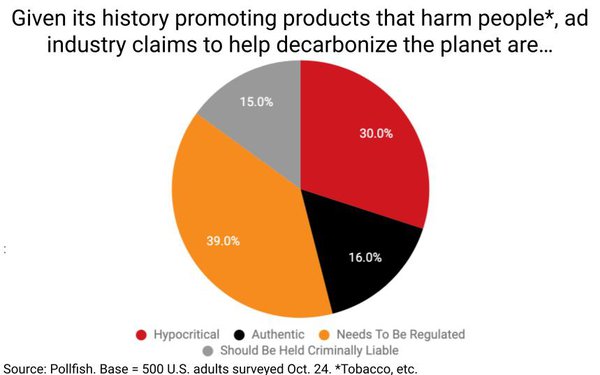 1 comment about "Americans: Ad Industry Should Be Held Liable For Greenwashing, Obstructing Climate Action".
Check to receive email when comments are posted.
Next story loading