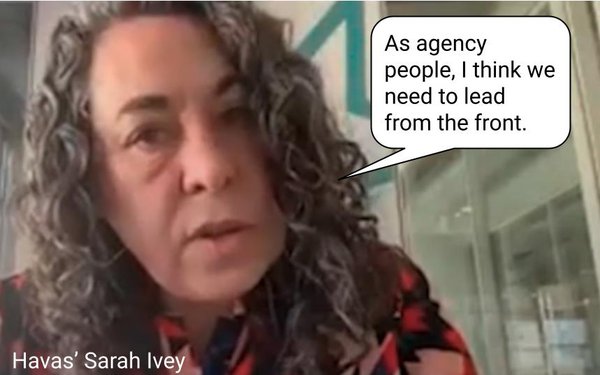 While the most egregious campaigns distorting the fossil fuel industry's climate reputation come from a small number of clients and agencies, the legal bar has been lowered for claims that just a few years ago would have been dismissed as mere "puffery," experts explained during a symposium on greenwashing hosted this week by the Institute of Advertising Ethics (IAE).

The result is that many more advertisers and their agencies may be facing legal liabilities for climate claims that are disproportionate to the actions they have taken.

That was the main takeaway from speakers during the IAE's symposium (see video below) on Wednesday, the first of two it plans to host. This week's was intended to provide a benchmark for understanding how pervasive and how problematic greenwashing actually is for the ad industry.

The second -- which will be held in December -- is intended to provide a framework for tools, solutions and action steps the ad industry can take to minimize the risks of greenwashing.

Some of those steps have already been articulated by experts such as former Edelman exec Christine Arena -- now CEO of Generous Films -- when she testified to Congress last month, including better rules around the disclosure of facts that counterbalance the "over-indexing" of energy company reputations caused by greenwashing.

This week's symposium makes clear how pervasive greenwashing currently is within he ad industry, and how varied -- and why it is emerging as a serious liability for advertisers and agencies that could well approach the magnitude it has been experiencing with new regulatory and litigative actions surrounding consumer data and privacy.

“It’s very important for the agency world to understand that greenwashing exists on a spectrum," Arena explained Wednesday, noting: "At the low end of the spectrum, there’s slight exaggeration between words and actions that maybe companies and brands want to get credit for their green initiatives. And we appreciate that. We want them to get that credit."

On the other end of the spectrum are explicit forms of misinformation that may unintentionally create "gaps between words and actions," or even worse, "disinformation with a 'D'," that willfully distort the reputations of fossil fuel brands for "profit or political gain."

Arena should know. As a former PR exec who quit Edelman due to its undisclosed fossil fuel clients and climate change stance, she has become something of a whistleblower, and during her Congressional testimony and this week's IAE event, reiterated that the worst offenses involve not just words, but explicit actions designed to influence public policy, regulations and laws that have been holding climate action back. They include intensive lobbying efforts, as well as "astroturfing" -- using third-party activation teams posing as grassroots organizations opposing climate action -- or even disinformation campaigns to "delegitimize" authentic, grassroots climate action advocates.

While the most egregious practices come from a small number of agencies, PR firms and their clients, Arena said "that is when greenwashing borders on fraud."

According to another expert -- Oxford Sustainable Law Programme Senior Research Fellow Ben Franta -- the bar defining that border has come down in recent years, and litigation and regulatory actions have been increasing for offenders.

"The law emphasizes 'misleading,' not just factually false," Franta said, noting that there have been an increasing number of successful civil suits damages "such as so much money per violation -- and a violation often is tallied by every time a consumer sees that impression, that's one violation, so those can add up very quickly."

Importantly, Franta said those judgements often don't require "knowledge of wrongdoing," "so even if they're an accident, there can still be liability found.

Aside from civil actions, Franta said there can be regulatory, administrative, and direct court orders brought by states or other authorities against greenwashing violators that levy "punitive fines."

"These suits have been growing," Franta noted, adding that "at least 20 of them have been filed since 2016," and at least 30 have been filed before "non-court entities in various countries, as well."

He characterized it as an "exponential growth" in climate litigation in recent years.

"Of the 2,000 climate-related lawsuits ever filed, about a quarter of them were filed in the last two years alone," he said.

While this week's symposium was not intended to provide ad industry solutions to greenwashing liability, one industry insider provided some initial practical advice during her presentation.

Noting that the ad industry needs to play catch-up from a history based on aggressive hyperbole and a culture of wanting to "win" at all costs, Havas Chief Strategy Officer Sarah Ivey said it's time for agencies to begin pushing back when clients submit campaign objective briefs that may border on greenwashing and to begin having "tough conversations" with them.

“It’s one of those soft skills we need to teach everyone in this business – from super junior people to senior people – is to have this conversation," she said, adding that it isn't just about climate-related issues, but also other socially charged positions such as social justice, inclusion, etc.

“We need to treat those messages in those campaigns with a much higher level of scrutiny and circumspection. And to create those cultures around those briefs and those campaigns that open up conversations," she said, noting that Havas has been moving more in that direction in recent years, from its pioneering work in its decades-old "Meaningful Brands" research, to its applications to "Meaningful Media," and just this week she said, it announced a new "Meaningful Social Metrics" initiative incorporating its data on carbon footprints, social impact and "things like that to help clients make better choices when it comes to running in media.

"As agency people, I think we need to lead from the front," she said.