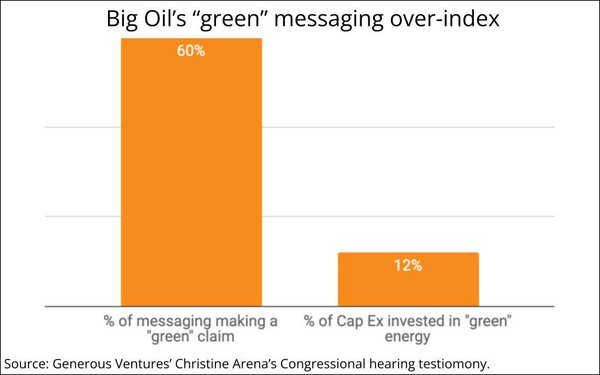 During a Congressional hearing this week on the role advertising and PR agencies play "greenwashing" the fossil-fuel industry and helping to prevent action on climate change, much of the questioning and testimony digressed into partisan positions that were more about grandstanding for political points than trying to expose and understand what the underlying issues of using sophisticated marketing tactics and technology to undermine climate action.

But one witness grounded the underlying need for the hearings, as well as providing a clear message to lawmakers about the action the need to take to address it.

"Over-indexing is unethical and it needs to be policed," Generous Ventures founder and CEO Christine Arena said when asked about what explicit action Congress should take.

By over-indexing, Arena meant that the fossil fuel industry -- and the advertising, public relations, public affairs and lobbying firms it hires -- utilize sophisticated tactics and messaging that omit fact and distort the truth to create public reputations that are disproportionately greater than what they are actually doing to create "green" energy and combat climate change.

And she provided data to back it up.

Citing data indicating that upwards of 60% of the media "messaging" -- including PR, advertising claims, etc. -- made by the fossil fuel industry includes one or more "green" claims, she noted that on average the industry only invests 12% of its capital expenditures in actually trying to develop it.

And for the biggest companies, including Chevron and ExxonMobil, it is much less. She estimated ExxonMobil only invests about 8% of its cap ex developing green energy solutions.

Arena should know. Before launching Generous Ventures to combat climate change, she was a top executive at PR firm Edelman working on fossil-fuel accounts.

And while it isn't uncommon for marketers in many categories to "over-index" their reputations vs. the reality of what they do, she said fossil-fuel marketers are different, because they're not just "selling a product," but they are influencing policies that are impacting the health, well being and security of Americans, as well as the global population.

When asked explicitly what lawmakers should do to "police" that, Arena has a very simple and logical response:

Create laws requiring fossil-fuel companies to disclose all the facts about their green claims, as well as their tactics and practices when paying "third parties" to influence others on their behalf, including so-called "astroturfing" organizations -- or paid operations intended to look like grassroots ones, or even fake social media accounts.

"Rules around disclosure," she said. 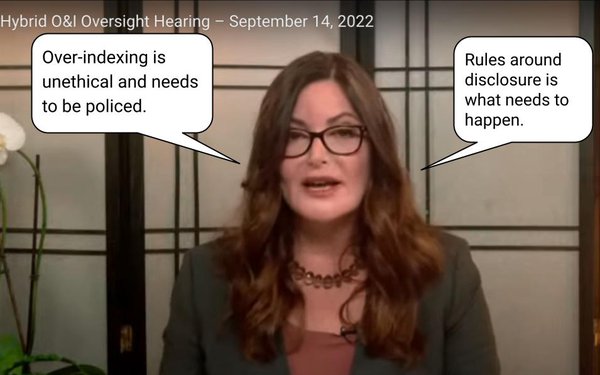