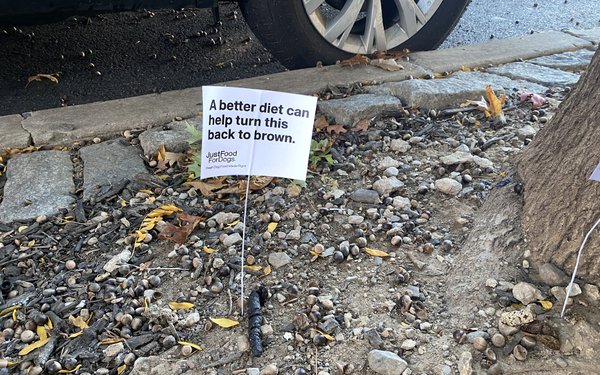 Human-grade dog food company JustFoodForDogs is putting the spotlight on the unhealthy diets of some dogs with an out-of-home effort that uses actual poop as a platform.

At the center of the campaign from Walrus are miniature billboards inserted into poop piles left by dog owners throughout New York City indicating the signs -- like discoloration, or bad consistency --  that indicate the dog who produced it is in need of a healthier diet.

Copy includes messages like “This dog could use a fiber rebalance” and “Whoa, that’s a big one! A kibble-based diet is proven to lead to overly large stools.”

“Most people don’t know that their dog’s diet is lacking, but we realized that there are signs of unhealthy dogs all over the streets of New York City every day in the form of uncollected poop. It felt like a perfect unexpected place to do a little bit of education,” says Deacon Webster, chief creative officer of Walrus, in a release.

Each sign will bear JustFoodForDogs simple sentiments and branding, along with an assurance that cleanup crews will arrive shortly to remove the poop as a courtesy.

More OOH ads are running throughout the city on billboards, bus shelters, wallscapes and taxi tops. Social is running on Instagram and Facebook.

The campaign features a new tagline for the brand, “Fresh Dog Food Made Right,” and directs dog owners to Petco, where they can purchase or learn more about JustFoodForDogs. JustFoodForDogs is available at over 1,000 Petcos nationwide, as well as online at Chewy.com.

The food is cooked fresh daily and refrigerated or frozen, including at two flagship kitchens in New York City.

“This campaign is about letting dog owners know that all fresh dog foods are not the same, as Just Food For Dogs is the only one that has invested in nine years of research to help create healthy recipes and improve dog’s lives,” says Steve Joyce, CMO of Just Food For Dogs, in a release.