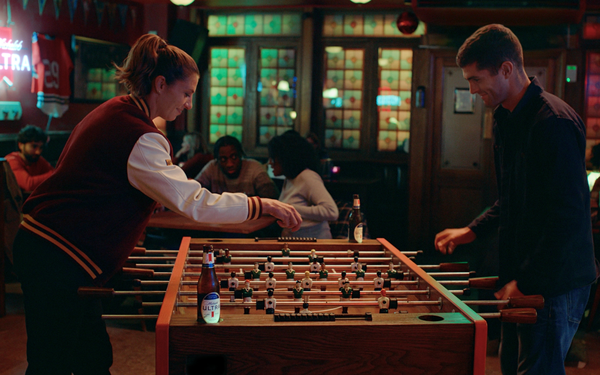 U.S. soccer superstars Christian Pulisic and Carli Lloyd won’t be squaring off on the playing field any time soon, so a foosball table will have to do.

The matchup comes courtesy of Michelob Ultra in the walkup to this month’s World Cup soccer matches in Qatar.

The foosball action kicks off in this spot from the draftLine agency titled “The Joy Of Every Match.”

Pulisic and Lloyd square off until a ball flies off the table toward a nearby booth.

It’s caught by Guillermo Ochoa, the goalkeeper for Mexico’s Eli Tri national football team, who will mark his third consecutive year as a World Cup starter.

“I’m up next,” says Ochoa as he tosses the ball back.

Michelob Ultra is partnering with urban streetwear designer Guillermo Andrade for what the brand calls an Unofficial World Cup jersey that can be purchased on Anheuser-Busch’s merchandise website.

Last week, Anheuser-Busch said that it has renewed its commitment as the official beer sponsor of tge U.S. Soccer Federation—a status the company has held since 1987.

“Soccer already has a strong and passionate fanbase in the U.S. and it’s only continuing to grow,” Anheuser-Busch head of sports marketing Matt Davis said in a news release announcing the multiyear sponsorship extension.