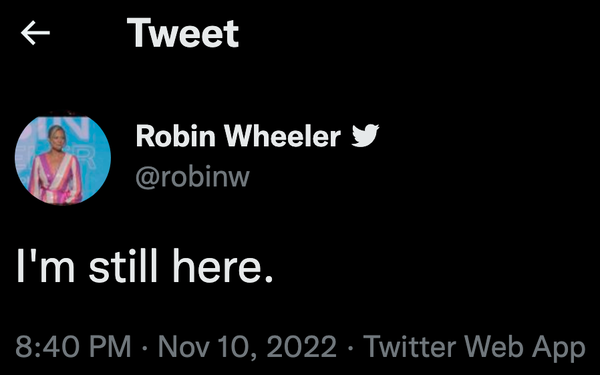 In the latest developments in the Twitter tumult, on Thursday, Yoel Roth, senior director of trust and safety, resigned, and Robin Wheeler, the company's chief sales executive resigned, but was persuaded to stay on by CEO Elon Musk.

News of their resignations came just hours after the resignations of three top executives overseeing Twitter security and compliance, and a warning from the Federal Trade Commission that it is “tracking recent developments at Twitter with deep concern” in light of Twitter’s previous violations of consent decrees based on alleged consumer privacy violations.

Wheeler, who is vice president of client relations, tweeted "I'm still here" at 8:40 pm Thursday. She "paused" her resignation to see if Twitter upholds its privacy and regulatory obligations, according to a Wall Street Journal source.

She and Roth are/were among the executives most key to maintaining advertisers' currently tenuous relationship with the company.

Twitter CEO Elon Musk had both executives participate in a Twitter Spaces event on Wednesday held to try to reassure advertisers that have paused advertising on the platform due to concerns about brand safety under Musk’s ownership.

Before the news that Wheeler had reversed her resignation, reported by Bloomberg, Axios reported a source saying that her loss “means it’s over... trust is gone.”

Musk had been “leaning on” Roth in recent days to explain Twitter’s efforts to control harmful content, Axios noted.

The resignations followed Musk’s first note to employees, at midnight on Wednesday, in which he warned that “without significant subscription revenue, there is a good chance Twitter will not survive the upcoming economic downturn.”

“Frankly, the economic picture ahead is dire, especially for a company like ours that is so dependent on advertising in a challenging economic climate... The road ahead is arduous and will require intense work to succeed,” he wrote. 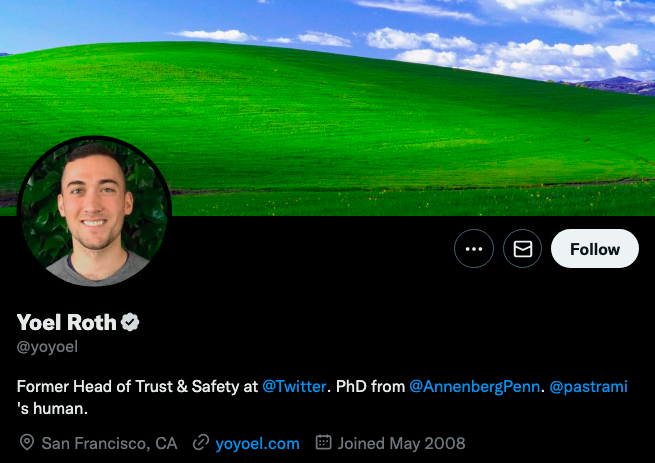