Tim Burton And 'The Addams Family' Is Winning Combo For Netflix 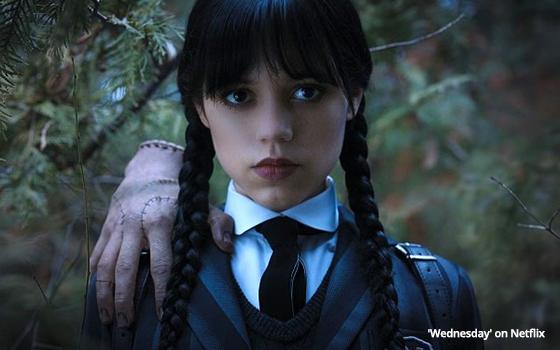 Director Tim Burton applies the same panache he is known for in his movies to a new take on “The Addams Family” coming to Netflix next week.

This time, America’s favorite kooky, spooky and altogether "ooky" family is seen through the eyes of one of them -- Gomez and Morticia Addams’ goth teenage daughter Wednesday.

“Wednesday” happens to be the title of this eight-episode series that is premiering on a Wednesday.

In this new interpretation of Addams family dynamics, Wednesday (played by Jenna Ortega, photo above) is the central figure.

In many ways, she is a typical teen cast in the same mold from which TV tends to portray them in myriad shows. She is strong-willed, rebellious and vocally judgmental about everyone she meets.

She is an habitual frowner who is at that stage in her teenage life when she despises both of her parents but reserves a special hatred for her mother.

In Episode One of “Wednesday,” she is sent to a unique private boarding school for paranormal misfits after she commits a particularly heinous act of revenge against some high school bullies in defense of her pudgy brother Pugsley.

The school is called Nevermore Academy. It is located in a remote woodland in a gothic Victorian building that is larger, but in some ways similar to the well-known Addams family home seen in the original Charles Addams cartoons, the 1960s TV show and subsequent movies.

Episode One has her acclimating to her new surroundings in which she makes more enemies than friends.

In subsequent episodes, she will emerge as a teenage sleuth who will assign herself the task of investigating some local mysteries that just might interlock.

The show is good news for “Addams Family” enthusiasts. In Episode One, featured characters include Gomez and Morticia (played by Luis Guzman and Catherine Zeta-Jones), Pugsley (Isaac Ordonez), butler/chauffeur Lurch (George Burcea) and Thing, the severed hand who resided in a box on the old “Addams Family” but in this show has freer range.

Uncle Fester turns up later in the series, played by Fred Armisen. There is no sign of shaggy Cousin Itt, however, in any of the Netflix press materials.

But appearances by Wednesday’s famous relatives are intermittent in the series in order to keep the spotlight squarely on her. Petite Jenna Ortega, 20, more than manages to carry her portion of the show, which amounts to about 90% of it.

Also lending support in the cast are Christina Ricci in the role of a dorm supervisor and Gwendoline Christie as the principal of Nevermore.

Ricci played Wednesday Addams in two Addams Family movies in 1991 and ’93 when she was 11 and 13, respectively.

Christie gained international fame in the standout role of the rugged warrior Brienne of Tarth in “Game of Thrones.”

“Wednesday” was co-created by Alfred Gough and Miles Millar, who are also showrunners, executive producers and writers.

But if there is a marquee name behind the scenes of “Wednesday,” then it is Tim Burton, who is one of only a few directors in movies today whose name on a movie is as potent as the stars who headline it.

He directs all eight of the “Wednesday” episodes. That alone should draw audiences. The show itself will then retain them.