New Animated 'Reindeer In Here' On CBS Is Instant Classic 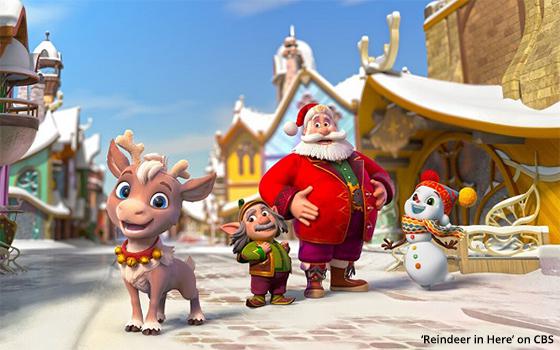 An earnest young reindeer named Blizzard, who hopes to one day join Santa’s sleigh team, joins forces with a lonely boy, a gifted girl and a talking snowgirl to find Santa Claus’ most valuable possession: A snow globe through which the children of the world tell him their Christmas wishes.

Without the missing snow globe, Santa has no idea what the world’s children want for Christmas. Hence, there will be no Christmas unless the magic snow globe can be found.

That’s the basic plot outline for “Reindeer In Here,” a new animated, one-hour Christmas special coming to CBS next Tuesday. Clearly the stakes are high, and so is the quality of this show.

Airing from 9 p.m. to 10 p.m. Eastern, “Reindeer In Here” will be paired on that evening’s schedule with “Rudolph the Red-Nosed Reindeer,” airing from 8 p.m. to 9 p.m.

Produced in 1964 in the high technology of the time, stop-motion animation, “Rudolph” has been a Christmas season perennial ever since.

Among its contributions to the culture is Burl Ives singing “Holly Jolly Christmas.” In the show, he was the voice of Sam the Snowman.

The song has also become a Christmas standard heard over and over again during every holiday season. Full disclosure: I’m no Scrooge at holiday time, but I can’t stand that song.

The new special that forms the second half of CBS’s Super Reindeer Tuesday is produced in modern-day, state-of-the-art animation and it is a joy to see and hear.

And here we come to the subject once again of Adam DeVine, who figured into one of the best thumbs-up reviews in the TV Blog all year -- Tuesday’s review of the new Peacock “Pitch Perfect” series subtitled “Bumper In Berlin.”

Devine played the Bumper character in two “Pitch Perfect” movies and the Peacock series achieves greatness in large measure because of his exuberance and talent.

In “Reindeer In Here,” he supplies the voice of Blizzard with the same infectious enthusiasm.

Joining him in the voice cast are Jim Gaffigan as Santa, Henry Winkler as Santa’s long-time head of holiday operations (HOHO), Candace Cameron Bure as Pinky the reindeer and Donald Faison as another reindeer, Bucky, Melissa Villasenor as Candy the Snowgirl, Gabriel Bateman as the lonely 10-year-old Theo and Brooke Monroe Conaway as the girl genius Isla.

“Reindeer In Here” has all the entertainment hallmarks children and their parents look for in today’s animated productions (except on Adult Swim and the like).

The show is wholesome without being treacly. It is fast-paced and filled with comedy that will appeal to young and old.

Among other things, the setting of the show at Santa’s headquarters is a mild but hilarious send-up of corporate culture. If the kids don’t get the joke, no harm, no foul.