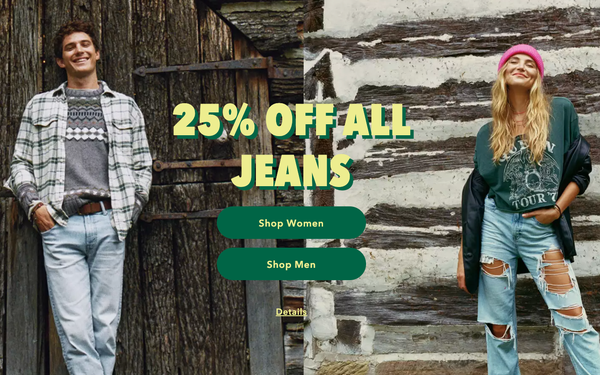 After a short-lived “Hey, we’re sick of yoga pants!” sales burst, the denim business will soon be singing the blues again. American Eagle Outfitters and Abercrombie & Fitch, some of Gen Z’s favorite blue-jeans brands, are the latest specialty retailers to post sales declines.

A new report from Coresight Research says softening demand in the second half of the year will slow the growth of the denim market in the U.S., now likely to finish the year with a gain of just 6%. The researcher expects denim sales to drop in 2023, falling in the low single digits.

That’s rough news for denim brands, still struggling to bounce back from the first year of the pandemic, when America’s move into sweatpants sparked a 20% decline in sales. That was followed by growth of 18.8% in 2021.

Even with the predicted decline of an estimated 1% next year, Coresight says denim will outperform the total clothing market in 2023 “as consumers’ pent-up demand for updating their wardrobes will have faded away. Inflation will drive units down in 2023.”

But jeans are losing ground. “Although we expect the U.S. denim market to grow in 2024 and beyond, we do not expect the share of jeans versus the total market to recover to levels closer to those seen before the pandemic during the forecast period because of stronger sales growth of activewear and athleisure categories.”

The shift away from skinny jeans styles and into looser fitting pants has helped sales. But only 13.3% of consumers say their main reason for shopping is to keep up with the latest fashion. A much bigger driver is replacing old or worn-out pants, with 58.5% of respondents saying that is their No. 1 motivation.

Walmart, Amazon and Kohl’s are the top three places to buy jeans. “Our findings indicate that compared to specialty retailers such as American Eagle Outfitters and Gap, ecommerce platforms, mass merchandisers and department stores are major destinations for denim shopping,” according to Coresight.

Results came in ahead of expectations, with a solid performance from its Aerie division. But sales at the flagship brand fell 11%. Higher markdowns cut into profits, which fell to $81.3 million from $152.2 million in the year-ago period. And for the coming quarter, the Pittsburgh-based retailer says it expects sales to drop in the mid-single digits.

At Abercrombie & Fitch, which also beat expectations, sales fell 3% to $880 million. Sales gained 10% at the flagship and decreased 11% at Hollister, its lower-priced brand. It posted a loss of $2.2 million, compared to net income of $47.2 million in the year-ago period.