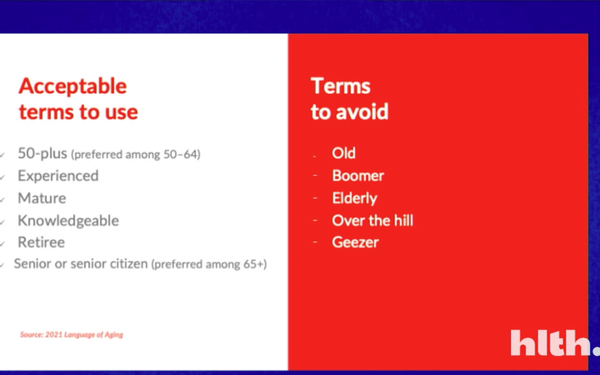 AARP has some words of wisdom for marketers: Respect your "elders" by avoiding that term.

Speaking at last week's HLTH conference in Las Vegas, Patty David, the group’s vice president of consumer insights, reported that 50- to 59-year-olds are most likely to boycott brands due to “age stereotyping.”

Danielle Duplin, co-founder of AGENCY, a nonprofit that supports older Americans in the workplace, said that this may be because “when you turn 50, there are a lot of signals out there. You’re a little cranky when the marketplace is telling you that you’re old.”

David added that one in five Americans aged 50 and older -- or 22 million people -- are likely to boycott brands due to age stereotyping.

“So, if you’re a startup trying to grow, be very, very clear and careful about the imagery that you’re including in your marketing campaigns,” cautioned Duplin.

Not just imagery, either, said Andy Miller, senior vice president of AARP’s AgeTech Collaborative,  but “words really, really matter…’Elder,’ nope. ‘Senior is somewhat acceptable, depending on how old they are. “

And the very word "old” should also be avoided.

AARP was not the only nonprofit advising marketers at the conference.

“Abortion is healthcare,” declared Alexis McGill Johnson, president and chief executive officer of Planned Parenthood, who said that “no private companies can afford to be neutral in this moment. You have a choice about where you do business,  with whom you do business, about what that looks like in every single state.”

“Too many companies are supporting incredible hostile lawmakers that are willing to essentially create legislation to turn us into second-class citizens,” she said. “it’s really important that you stand with your values in this moment.