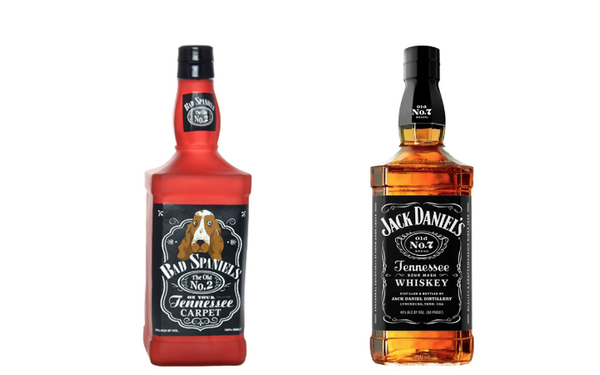 Image above courtesy of Whiskey Raiders.

When is a brand parody not legal?

The U.S. Supreme Court will make that determination in a case involving Jack Daniel’s whiskey and a squeaky dog toy branded Bad Spaniels.

In addition to mimicking the shape of the Jack Daniel’s Old No. 7 bottle and the label’s reference to the whiskey’s Tennessee origin, the front of the Bad Spaniels toy reads “The Old No. 2 on your Tennessee carpet.”

At issue is the relationship between trademark and free-speech rights.

It will hinge largely on a 1989 case titled Rogers v. Grimaldi, which determined that unauthorized trademarks can be used as long as they don’t mislead consumers.

Among other arguments, VIP Products believes that although the Bad Spaniels toy resembles the Jack Daniel’s trade dress and bottle design, there are significant differences—most notably the image of a dog and the wording on the Bad Spaniels label.

Rogers v. Grimaldi involved a lawsuit by actress, dancer and singer Ginger Rogers over the 1986 film “Ginger and Fred,” which depicted two dancers emulating the dance routine of Rogers and Fred Astaire.

A court ruled that the Lanham Act does not bar “a minimally relevant use of a celebrity's name in the title of an artistic work where the title does not explicitly denote authorship, sponsorship, or endorsement by the celebrity or explicitly mislead as to content.”