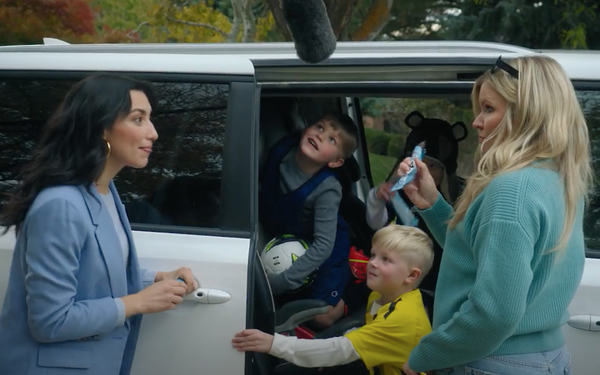 Mexican-American actress Jude Salazar is the new “Flavoruptor” for the Built Bar line of protein bars.

That means she's interrupting folks to introduce them to new and returning flavors being rolled out by the four-year-old company.

It begins with a campaign titled “You Gotta Try This” from agencies The Moden-a and Public Service in which Salazar and a camera crew pop in unannounced at a corporate office and hands out Built protein bars.

Taking over a presentation screen, Salazar says “These are the most important numbers you’ll see all year”—a reference to Built’s 17 grams of protein, 130 calories and four grams of sugar.

In other spots, Salazar approaches a mom loading kids into a car and a woman working out in a gym.

Salazar’s film credits include “Retrograde,” “Strangers In Paradise,” “Love Is Not Enough” and “The Elderly Man.”

According to Built CMO Jim Lucero, Salazar embodies many of the products’ brand attributes.

They include “being a little irreverent, but respectful; bold but approachable; in your face, but welcoming & friendly; smart but not ‘sciencey’; and fun and exciting,” Lucero tells Marketing Daily.

“I’d say that Jude exceeded our expectations in expressing herself as the Built brand.”

Based in Utah, privately held Built Bar was founded in 2018.