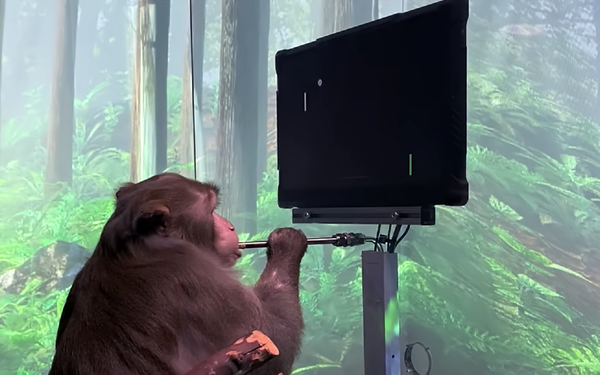 You could make the case that Elon Musk -- the genius behind Tesla electric cars and SpaceX private space exploration – is also a genius in medtech because of his Neuralink company. But both that venture, and Musk's lifting of Twitter restrictions on COVID misinformation, have pissed off much of the healthcare community.

Neuralink is developing brain implants initially designed to help improve or restore vision, as well as enable people with almost no muscle ability to make phone calls faster than people with working hands can.

Those two applications were cited by Musk in a Wednesday night “Show and Tell” in which the entrepreneur announced that Neuralink expects to do its first human implant in six months, pending Food and Drug Administration approval of a clinical trial.

Neuralink implants have already been done in monkeys and other animals, and Musk showed video of a couple of monkeys playing Pong and using a computer keyboard telepathically.

“We care a great deal about animal welfare,” Musk noted. “Before we would even think of putting a device in an animal, we do everything we possibly can with rigorous benchtop testing. We’re not cavalier.”

Those comments may have been made in response to a new website -- NeuralinkShowAndTell.org -- set up earlier in the week by the nonprofit Physicians Committee for Responsible Medicine to reveal what the group calls “the grisly details of Musk’s monkey experiments.”

The organization claims that hundreds of pages of public records contain evidence showing that “Neuralink employees have been mutilating and killing monkeys” in pursuit of the company’s goals.

The site tells the stories of eight specific monkeys in pretty graphic detail, and also provides a rundown of non-animal methods that Neuralink could instead be using in its research.

Turning to Musk’s move to lift restrictions on COVID misinformation “aghast” would be a kind word to use for much of the response from the medical community.

“Vaccines have a major weakness, and that’s misinformation,” David Bowen, head of policy and advocacy at ad agency Klick Health, told Pharma and Health Insider. ‘Wave after wave of false statements about vaccines have limited their uptake, reducing the protection they would otherwise provide. Allowing unchecked misinformation to spread on Twitter will compound this problem and put more lives at risk."

“Nowhere near enough was being done to stamp out medical misinformation on social media previously, but this step, along with re-platforming voices who wish to sow confusion and increase mistrust in medicine, will do more harm,” Jack Resneck Jr., president of the American Medical Association, said in a statement quoted by Politico.

Rolling Stone, cautioning that Twitter could now become a “misinformation superspreader,” reported that “users are already testing the waters to see what kind of false statements they can knowingly publish: “’COVID was created in a lab by the Chinese with the assistance of Dr. Fauci,’ one user tweeted Tuesday, quickly garnering 5,000 likes. ‘Ivermectin works!!! Go figure,’ posted another user, who got 11.9 thousand likes.”

What can purveyors of truthful information do in the wake of Twitter’s policy reversal?

Eric Feigl-Ding, chief of the COVID task force at the New England Complex Systems Institute,  urged people to stay on Twitter and "NOT cede the town square" to the misinformed.