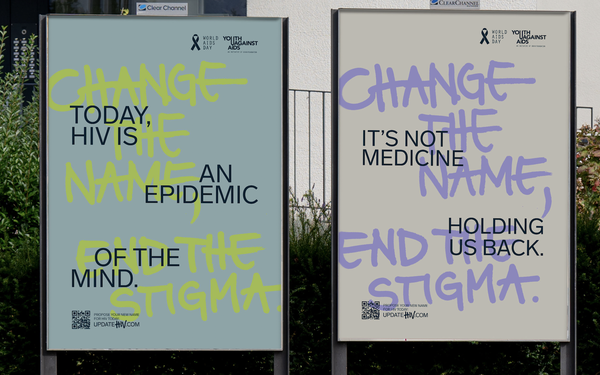 Just days after the World Health Organization (WHO) rebranded monkeypox as mpox, the ohhh! Foundation’s Youth Against AIDS initiative called on WHO to rebrand HIV -- backed by an ad campaign from Zurich-based creative agency Serviceplan Suisse.

An “Open Letter” to WHO, citing reasons for the rebranding request, ran Thursday, World AIDS Day, in The Times (UK), Tagesspiegel and Handelsblatt (Germany), NZZ (Switzerland), Vangardist (Austria) The Times (UK), NZZ (Switzerland) and other publications. Other media being used in this “Change the Name, End the Stigma” campaign include online, social media, and out-of-home in such locations as New York’s Times Square.

The open letter was also delivered in person to Meg Doherty, WHO’s global director for HIV and Hepatitis.

“HIV is an epidemic of the mind,” the open letter declares. “Our adversary is not a biological virus living in people’s bodies, but our own thoughts and attitudes. For too many, ‘HIV’ means stigma.”

“Living with HIV today is nothing like it was 40 years ago,” the organization said in a statement. “Stigma, however, has remained nearly the same.”

The campaign calls on people to go to UpdateHIV.com to propose their own names for the virus.

Partners in Update HIV and the “Change the Name, End the Stigma” campaign include Merck research subsidiary MSD and pharma company Gilead Sciences, a leader in developing antiviral drugs against HIV/AIDS and other diseases.

Another AIDS-focused foundation isn’t so fond of Gilead, though. On Thursday, the AIDS Healthcare Foundation (AHF) staged protests in Washington D.C., Miami and Oceanside, California, to protest Gilead’s “avarice in its drug pricing and policies.”

AHF said that  “in March, Gilead put profits before patients by unilaterally imposing unlawful conditions on when and how it will give discounts for certain hepatitis C drugs… Lawyers for the Health and Human Services Department in both the Biden and Trump administrations have said these restrictions are clearly illegal.”

Gilead’s statement said it had seen increasing instances of duplicate discounts applied to the same bottles of its hepatitis C products. As a result, Gilead asked  for more documentation from entities that provided discounted prices.

No word on whether Gilead, which has the same name as the totalitarian country in “A Handmaid’s Tale,” might want to do its own rebranding.