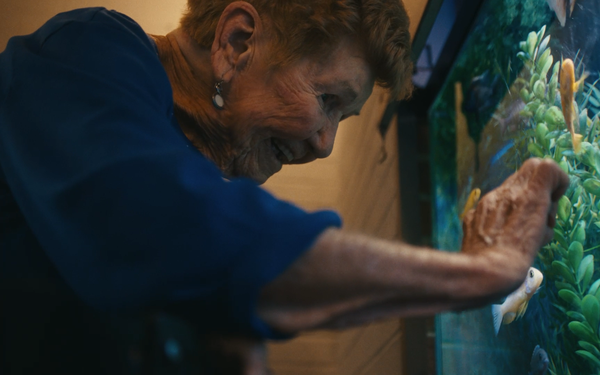 Klick Health’s annual holiday videos have become something of a phenomenon over the past decade.

After all, CW Network’s “Greatest Holiday Commercials Countdown” show in 2019 featured the work of many creative agencies, but likely only one whose commercial wasn’t for a client. That exception was Klick Health’s “Epic Office Holiday Remix” -- essentially a 140-second music video featuring an original piece by Andrew Huang that used only sounds (130 of them) heard in Klick’s office.

This year’s Klick YouTube video ties in directly with the agency’s healthcare mission through a partnership with a long-term care home.

The three-minute spot, filmed at Toronto’s nonprofit Tony Stacey Centre for Veterans Care, starts with scenes of the facility’s residents as an original new song from singer/songwriter Taylor Ashton plays.  A graphic reads, “75% of residents at this long-term care facility receive ZERO visitors during the holiday season. This year, we wanted to change that.”

The viewer then sees “Klicksters” setting up a surprise party outside the facility, as a voiceover says, “It's our hope that we can spread some joy and bring some happiness to a community that might be underserviced this time of year.”

And finally, the payoff: Senior citizens celebrating outside, amid 25,000 lights, hundreds of visitors, a giant Santa throne, hot cocoa, and more.

The onscreen closer: “This holiday season, be the light in someone’s day….Share this video and we’ll donate $1 for every view to the Tony Stacey Centre for Veterans.”

The donated money (up to $10,000) will go toward renovating the facility’s aging building.

Klick, based in Toronto, has its second largest office in New York, so the agency is also supporting the Parker at Monroe nursing home in Monroe Township, New Jersey, by sending homemade holiday cards to its residents and adding the facility to its Klick it Forward giving platform for the month of December.

Klick it Forward is a program in which the company gives employees dollars to be used for charities of their choice.