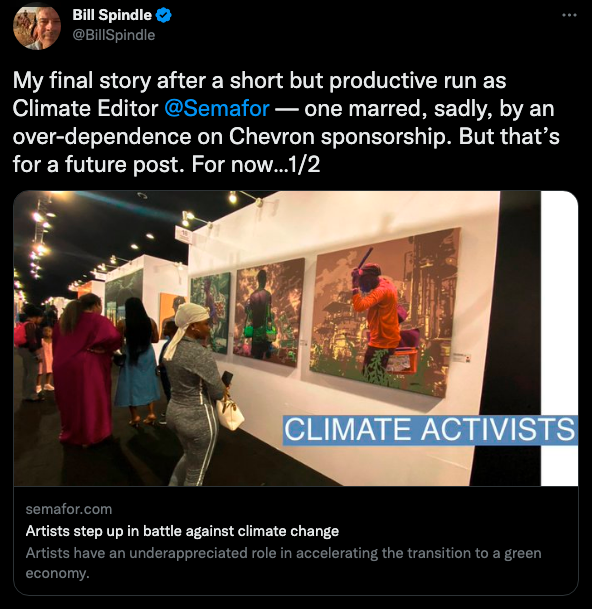 Just months after launching, digital news startup Semafor has lost its climate editor due to its "over-dependence on Chevron sponsorship."

"My final story after a short but productive run as Climate Editor @Semafor," Bill Spindle, a veteran journalist who previously worked at The Wall Street Journal, Bloomberg and other publications before joining Semafor last summer, tweeted Dec. 2, posting a story about artists stepping up their battle against climate change.

In a follow-up series of tweets, Spindle, who has since launched "The Energy Adventure" newsletter on Substack, explained that while Chevron did not explicitly influence Semafor's coverage, he made he decision because he was concerned about the appearance of having Chevron's ads running on he same page as Semafor's articles about the climate crisis, "particularly as the dominant advertiser."

"Semafor, however, is pushing back," Oliver Darcy, wrote in CNN's "Reliable Sources" newsletter Monday, quoting a Semafor statement: "We decided to part ways with Bill due to issues that were unrelated to any advertising partnerships.

"Semafor adheres to robust ad acceptability guidelines that we stand by, and that are industry standard. We did not remove advertising due to editorial requests and have a number of rotating sponsors of the climate newsletter."

The dust-up occurs as lawmakers are taking a closer look at the role advertisers and agencies play in "greenwashing" energy giants such as Chevron, including the placement of ads and native content adjacent to climate crisis editorial coverage.

On Thursday, the Institute for Advertising Ethics will host the second of two symposiums discussing ways the ad industry can build a framework and utilize tools to mitigate its role in greenwashing.