GE Buys Out Entire Edition Of 'The New York Times'

The New York Times scored a coup on Tuesday both online and in its legacy medium, print.

General Electric took over all of the paper’s pages, running 22 full-page color ads and five partial pages in a seven-figure campaign that also includes ads on desktop and mobile homepages, on three section webpages, in audio form on the podcast "The Daily" and in two newsletters briefings.

It's the first time ever that all of the paper’s real estate has been taken over by a single advertiser.

When Times subscribers click on the home page, they receive a banner ad, stating “A new beginning is on the horizon at GE.” Readers can link through to four additional ads, each explaining one of the breakout companies. And they are invited to “Pick up a paper copy to see how focus can change your world, too.”

According to Axios, which broke the story, the special paper will be delivered to the Times' 330,000 daily subscribers, and 5,000 copies will be placed at Grand Central Station, Penn Station, the New York Stock Exchange and other locations.

The effort had to be carefully calibrated.

"This isn’t an off-the-shelf product," Seb Tomich, head of advertising at The Times, told Axios ."It takes a lot of work to clear out the entire paper for one brand." 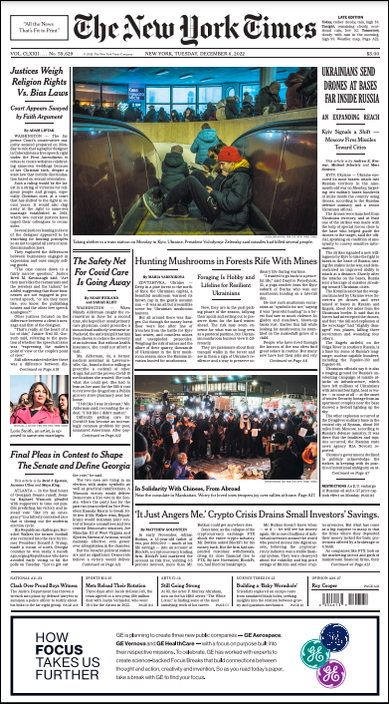