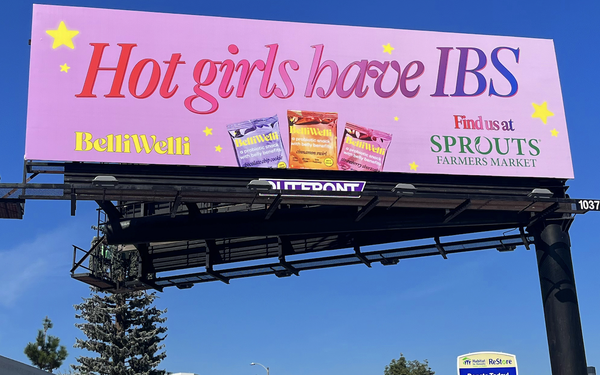 Until recently, you would have been hard pressed to call irritable bowel syndrome (or IBS) sexy. Then came BelliWelli and its “Hot Girls Have IBS” hot pink billboard campaign.

Six years ago, Wilson, then a Los Angeles-based “celebrity matchmaker” working for Three Day Rule and Match Group, “developed pretty debilitating gut trouble.” She  “did everything I could to try to fix it: colonoscopies, endoscopies, breath tests, capsule tests, diet supplements. Nothing worked."

Her condition led Wilson to start a Facebook group of “people with gut trouble,” and then take over leadership of similar Facebook groups. “All of a sudden, I had created this really, really large community full of people just like myself.”

Meanwhile, Wilson’s husband, Nick, worked for months to make her a chocolate chip cookie that she could eat -- one without processed grains, dairy and other “gut aggravators.”

When the cookie was perfected, she shared that info with members of her online group. “We woke up the next day to hundreds of orders, so we started filling these out of our kitchen.”

The business boomed and three months later, “we quit our jobs, raised money and decided to become a real brand.” The goal: “make gut health approachable and fun instead of serious and medicinal.”

In addition to the original chocolate chip, BelliWelli now offers seven other flavors, including cinnamon swirl, birthday cake and fudge brownie.  It sells D2C from its website, as well as at at several retailers, including Sprouts, which recently came on board as its first national chain.

Ads for BelliWelli have run on Meta’s Facebook and Instagram since launch, but Wilson was “driving in the middle of Los Angeles one day and I thought, ‘Gosh, billboards are boring.’ I was looking at a watch billboard thinking, ‘Why doesn’t someone make something hot pink that really stands out?’”

One TikTok trend used the phrase, “’Hot girls have…’ and you’d insert a topic to destigmatize previously stigmatized conversations,” Wilson recalled. One example would be “Hot girls have anxiety.”

“I thought, we can use the same ability to reclaim the stigmatized word and space.” Thus hot-pink “Hot Girls Have IBS” billboards were born.

The first billboard, which went up in west Los Angeles in October, 2021, resulted in a $40,000 sales increase and 2.9 million people potentially reached on Instagram alone, according to BelliWelli.

That first board featured a phone number for people to text. Those who did received a message asking them to post a photo of themselves in front of the billboard, which would earn them free product.

The next two boards went up in Portland, Oregon and New York’s Times Square. Since then, another seven locations have been used.

“We generally always have at least one billboard going in some part of the country,” Wilson said, with each staying up for only 30 days.

How are locations chosen?

“We poll our Instagram and TikTok community to find out where everyone wants to see a billboard,” she said. “Price and availability is consideration number two."

But perhaps most importantly, billboards go in locations where there’s foot traffic, so that people can “stop and take a photo and send it to their friends….We’re not interested in billboards on the side of the freeway.”

As a result of such photos and resulting social media posts, "Hot Girls Have IBS” went viral, so BelliWelli has now trademarked the phrase, which in addition to the billboards is used in a line of D2C merchandise.

Despite the obvious appeal to young women, Wilson said the ads reach beyond that.

“A hot girl in our book is anyone who feels empowered when they see, ‘Hot Girls Have IBS,” Wilson said. "It’s very inclusive, which doesn’t seem obvious when you first see the phrase. We've had an 80-year-old send us photos in front of the billboard, saying ‘I’ve never felt hotter.’"