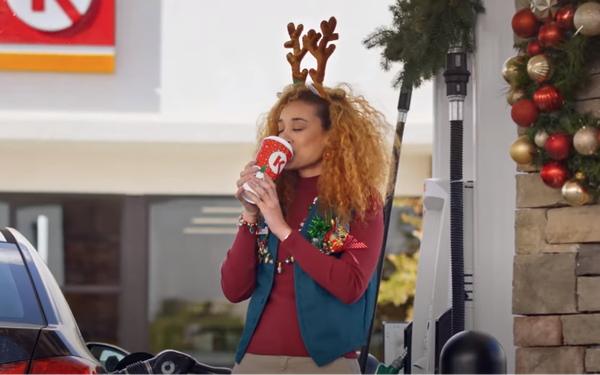 Running for the next year, the effort focuses on Circle K fuel, which is now available in over half of its 7,000 U.S. locations.

With electric vehicles gaining in popularity, it might seem counterintuitive to be opening new gas stations. But station owners make much of their profits inside the stores on sales of food and drinks, as well as alcohol where sales are legal. A recent survey by the convenience store association found that almost 60% of people who come for gas also go inside the store.

Don’t expect gas stations to begin offering charging anytime soon. Adding fast chargers to gas stations is enormously expensive. According to Future Energy, Level 3 charging stations cost around $40,000 for a single port, although there are tax credits and in some cases local municipal incentives available.

The Circle K campaign, which launched Dec. 2, also focuses on the retailer’s mission to make customers’ lives a little easier every day. The spot is holiday-themed, featuring actual Circle K employees alongside a variety of Circle K customer personalities, from delivery drivers to Santa’s helpers. The ad also features user-generated content from customers and an original jingle.

The media buy includes mostly digital streaming and social media channels. It takes a “customer-centric creative approach in the four-part ad series that showcases different customers, their fueling experiences and how Circle K has everything they need for their journey,” per the company.

Circle K customers are invited to share how the brand is part of their life for a chance to be featured in future ads or social media posts, plus the opportunity to win prizes.