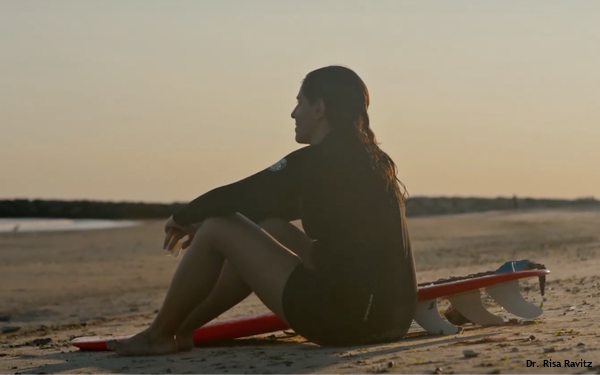 I once had an allergist who moonlighted as a producer of independent movies. Beaming, he told me about the romantic drama he’d worked on, directed by a woman with the same last name as, coincidentally, the ENT who had done my sinus surgery -- who, yes, was another producer of the film.

That’s about all I’ve ever known about the lives of my doctors outside of medicine.

Of course, I’ve also had dentists who love to talk endlessly while they have fingers and gadgets up my mouth, preventing me from telling them to shut up. But do they ever talk about, let’s say, their love of horses?

Enter Dr. Alexis Phaup, an equestrian dentist -- and the latest star of “I'm Also a Doctor,” a series of three-minute content marketing videos focusing on the personal passions of healthcare professionals. The campaign comes from digital banking service Laurel Road, in a team-up with Vice Media Group.

“Working with horses is very humbling,” says Dr. Phaup in her video. “Horses allow me to grow as a person, and to be better as a dentist.”

Three other videos in the series -- featuring a surfing neurologist, an anesthesiologist who designs 18th Century costumes, and a pediatric plastic surgeon who's also touring musician --are also up already on a Laurel Road landing page and will be streaming on the YouTube channels of both Laurel Road and Vice News.

Another video -- showcasing an emergency room doctor who’s also an underwater photographer -- is set to premiere next week.

Kaitlin Walsh-Epstein, chief marketing officer of Laurel Road, tells Pharma & Health Insider that the series demonstrates to healthcare professionals that “we’re more than a bank, we're a partner who truly cares about who they are outside of their profession.”

“Typically, doctors’ profiles are heavy on professional life and degrees, and little on who they are as people,” adds Andrew Brief, director of client services at creative agency DeVito/Verdi.

“This ‘docu-series’ approach helps us connect and engage with doctors in a much more ‘human’ and emotional manner. The series was created to champion their unique lives and journeys outside of medicine.”

To promote the series, DeVito/Verdi is using a combination of paid and organic media, including social, email and “communication through highly regarded healthcare associations. Paid social is also running on Vice’s social media platforms

While these well-produced mini-profiles, with branding only at the start and end of each, are being done to sow good will between the medical community and Laurel Road, I’d suggest the profiled doctors share them with their patients, current and prospective.

As a result of her video, if I ever need a neurologist, I may well decide to check out Dr. Risa Ravitz, who’s “fascinated by what the brain can do,” and uses surfing as a meditation technique: “It clears my head enough so that I can go and do the work I need to do.”

In addition to the online postings, Laurel Road -- the national digital banking service that runs Laurel Road for Doctors -- is also sharing the series with hospitals and other organizations “in hopes of inspiring medical students and residents,” DeVito/Verdi’s Brief says.

he featured doctors were garnered through outreach to Laurel Road members as well as an open casting call, Brief says: “Hundreds of submissions came pouring in. We wanted this initial group of five episodes to reflect a diverse mix of members – including gender, race, geography, passion and professional specialty.”

Laurel Road has had a student loan specialty since its launch in 2013, but “we understood early on that medical professionals have a unique set of challenges, as they are managing high debt and high-stress careers,” Walsh-Epstein explains.