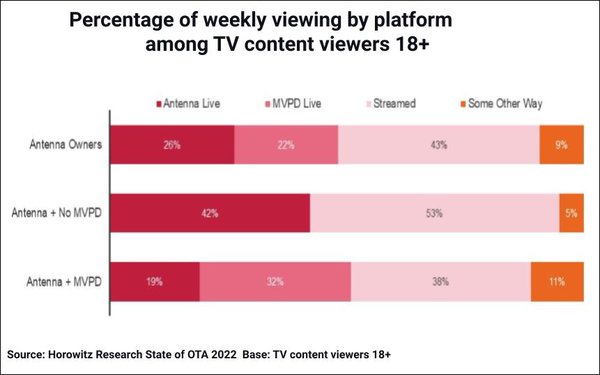 Traditional cable and satellite — and even connected TV livestreaming — face growing competition for TV viewing time among specific audience segments, in particular, as their adoption of linear delivered via digital antenna increases.

While the 18% of adult Americans overall currently reporting that they have a digital antenna is consistent with 2021, and lower than the peak adoption seen during COVID lockdowns, digital antenna ownership has grown among younger viewers and Latinx viewers in particular, according to Horowitz Research’s “State of OTA 2022” report.

Ownership is even more prevalent among the rapidly growing Latinx demographic. Fully 25% of Latinx TV viewers have digital antennas, compared to 18% among white non-Latinx and Black viewers, and 19% among Asian TV viewers.

Overall, 13% of TV content viewers surveyed say they are either planning to get a digital antenna or would be very likely to adopt one in the near future based on the description provided in the survey.

The study also finds that digital antennas have priority placement in the home, “perhaps filling the space once occupied by cable/satellite set-top boxes” in the growing number of households that have cut the cord, notes Horowitz.

Among digital antenna owners overall, self-reported time spent with content delivered through a digital antenna (chart above) accounts for 26% of total weekly viewing hours — more than the average 22% of time spent watching live MVPD, though still considerably less than the 42% watching streamed content.

Among antenna owners without MVPD service, time spent with live TV delivered that way jumps to 42%, more than four in 10 hours — not that far shy of streaming’s 53%.

Those who’ve hung onto their MVPD service still report spending about a third of their viewing time on that platform, and 38% on streaming, versus 19% on antenna-delivered TV.

Access to local broadcast channels and local news are the two top reasons cited for getting a digital antenna.

Further, 58% say that access to hyper-local news and information from their specific communities is important. In fact, interest in hyper-local content is on par with interest in national and regional news.

The study also points to some challenges and opportunities in the digital antenna/over-the-air (OTA) space.

Nearly two-thirds (62%) of digital antenna owners say they're satisfied with their antennas, but reliability and the number of channels available are frustration points for some.

And given the demand for live, local and hyper-local content, broader marketing of the technology represents a missed opportunity. More than half (54%) of those without digital antennas say they know only a little about the antennas. When presented with a description of the technology and its benefits, almost one in 10 say they’d be interested in getting such an antenna.

“There is still a healthy market for the live, linear local and hyper-local broadcast news and information that digital antennas can deliver free to consumers,” says Adriana Waterston, chief revenue officer and insights and strategy lead for Horowitz Research. “But consumer education is critical to drive awareness, continued adoption and viewership. There are many consumers who would benefit from having a digital antenna but don’t know it’s an option for them. It’s in the best interest of broadcasters to make a concerted effort to change that.”

The full report provides analysis of TV content viewers 18+ who have at least one TV set in the home and are decision-makers. The survey was fielded in November in English among 1,600 adults, with an oversample that resulted in 855 antenna owners. Data were weighted to ensure results are representative of the overall TV universe.