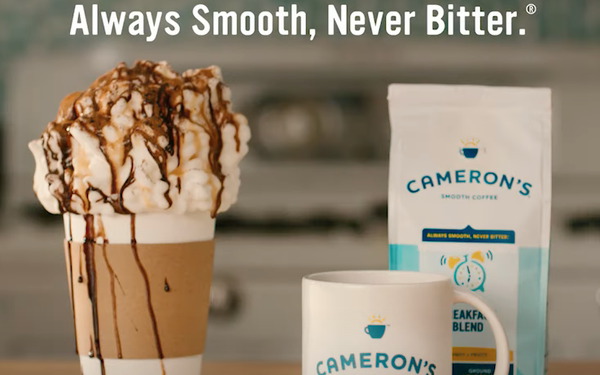 Midwest-rooted Cameron’s Coffee is targeting coffee people who aren’t necessarily into “coffee culture” but reside somewhere on the middle of the caffeine-consumption spectrum.

In this commercial from the Haberman agency, Cameron fan Lily watches as a companion marvels at the Starbucks-style concoction he’s just prepared—laden with whipped cream, syrup and powdered seasoning.

“Yep, this is it. I will never make another coffee as perfect as this,” the man exclaims.

“Think all that stuff’s gonna hide the bitter in that coffee-house coffee?” Lily asks. “I make perfectly smooth, never bitter Cameron’s every single time, because it’s made to make at home.”

The creative is a reflection of consumer tests in which Haberman presented people with about a dozen coffee brands including Starbucks, Dunkin’, Folger’s, Maxwell House, Caribou and Peet’s, according to creative director and partner Jeff Berg.

“Consumers right away split up brands like Starbucks, Caribou and Peet’s and said, ‘these are the fancy coffee shops where they make bitter coffee and you need to cover it with sugar and whipped cream,’” Berg tells Marketing Daily.

“On the other side were Grandma’s coffees like Folger’s and Maxwell House. Then there’s this thing in the middle—Cameron’s—whose consumers said ‘coffee culture’s not for me. It’s not made for a coffeeshop, so it actually works inside my everyday coffee machine.’”

That, adds Berg, “was the aha moment for us.”

In addition to social media, campaign creative is running on Hulu and other connected-television platforms along with ads on Amazon.

Founded in 1978 and headquartered in Minnesota, Cameron’s Coffee was acquired for $113 million in 2019 by Colombian conglomerate Grupo Nutresa S.A.