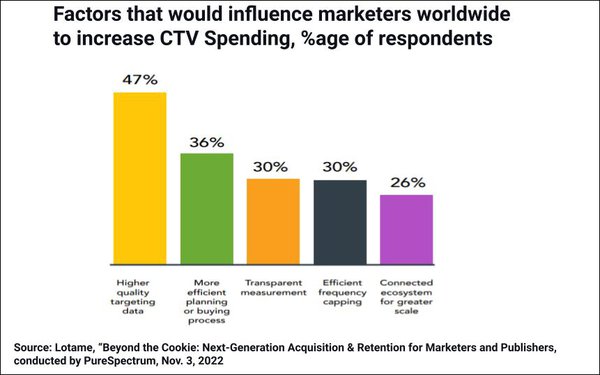 While that’s still small compared to linear TV, linear spend is declining as CTV grows. (IAB’s forecast calls for a 6.3% decline in linear spend, for example.) eMarketer projects that CTV — currently accounting for about one-tenth of total TV ad spend — will generate a third of projected $100 billion in combined linear and CTV spend by the end of 2024. By 2026, CTV is expected to reach $43.6 billion.

Yet, CTV’s momentum continues to be restrained by several key limitations.

In a survey of 1,400 marketers and publishers across seven markets in September (U.S., U.K., Australia, Colombia, India, Mexico and Singapore), Lotame found a large majority of marketers spending 25% or less of their budgets on CTV. 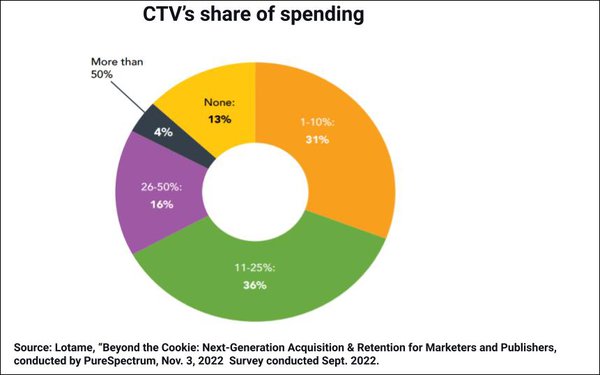 What would inspire marketers to accelerate spend further in this hot but still nascent medium?

More than a third (36%) are waiting for a more efficient, systemized planning or buying process. Currently, “As a buyer, you might be buying an ad from a device company, or a TV network, or an aggregator, or a set-top-box-maker — really, any number of companies that are in that value chain,” noted eMarketer Principal Analyst Paul Verna, during a recent podcast on CTV innovation.

Frequency capping systems/procedures that tackle the wasteful and embarrassing scourge of egregiously repetitious ads (a pattern that screams “bush league” to viewers, in addition to subjecting them to an experience akin to water torture) is on the wish list of about a third (30%).

Same with the perennial call for more transparent measurement —although the industry appears to be poised for real progress in measuring incremental audience and applying performance metrics in CTV in 2023, Michael Hopkins, vice president of go-to-market at MNTN, hopefully observed during the podcast.

And then there’s the 25% of buyers who say they would go bigger on CTV if there were a connected ecosystem to enable greater scale.

The scale limitation was spotlighted in a big way this week, when it was reported that the long-awaited ad-supported Netflix tier that debuted in the U.S. and a few other markets on November 3 has fallen short on viewership guarantees due to lack of inventory, causing Netflix to refund money to some advertisers.

Few seem to doubt that Netflix, which developed and launched the tier in the space of a few short months, and attracted apparently overwhelming advertiser demand, will work out the kinks over time.

But seeing the world’s largest streaming service stumble over the past year — first by missing its subscriber growth projections by a mile, and then in tackling this new advertising frontier — does drive home that the birth and maturation processes for new media are frequently painful.

While some might give Netflix credit for refunding advertiser money, any other publisher that failed to deliver on viewership promises — in this case forcing advertisers to scramble to use the returned funds at year’s end, with the holiday season nearly over — would be pegged as a digital advertising amateur, says Hunter Terry, vice president solutions consulting and CTV commercial lead at Lotame.

The flub also raises at least short-term questions, he says, including: What does this say about consumers’ expected adoption of Netflix’s ad-supported tier? Is not having enough inventory to fill advertising demand a positive sign that more subscribers than expected stuck with the higher-priced, ad-free tier, or does it just mean that Netflix doesn’t know how to forecast appropriately?

But Netflix is of course not your average publisher/streaming service. After all, it was able to sell out its inventory at a $65 CPM — higher than Disney+'s ask — because of its size and brand clout. So by Q1 2023, Netflix's initial advertising troubles "will be seen as a learning curve and quickly forgotten,” predicts Terry. “Advertisers will continue to spend with Netflix, and Netflix will most likely continue to sell out their inventory.”