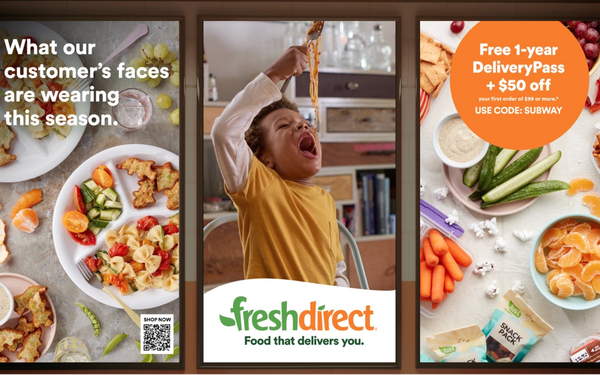 Founded in 2002, FreshDirect’s new campaign and brand tagline is “Food That Delivers You”—a reference to the benefits of natural and organic foods for which the company is known.

The campaign is targeted to Connecticut, New Jersey and New York, with commercials that focus on over-scheduled families at mealtime in FreshDirect’s core market.

In this spot from the Curiosity agency, a doorbell chimes and a middle-aged, busy mom retrieves a bag of FreshDirect groceries from her front steps. Back inside, kids sing in the background while a voiceover says, "They're not always planned, sometimes they just sneak up on you."

The kids remove items from the bag, eat fresh grapes and bring one to Mom—who is on her laptop.

Then the family of four sits down to a spaghetti dinner. "Why settle for just food delivery"when you can have food that delivers you?” asks the voiceover.

According to FreshDirect CMO John MacDonald, the company has been integral to the “fabric of food culture in New York City” for two decades.

“As a homegrown, trusted New York City brand, we are strengthening our commitment to providing service to the greater New York City tristate area—which is our biggest opportunity for future growth and expansion,”  MacDonald tells Marketing Daily.

Starting this month, FreshDirect is offering new tristate customers a free one-year DeliveryPass along with a one-time $50 discount. A new loyalty program is scheduled for rollout later this year.

The ads will run during FreshDirect’s busiest season—January through March—across broadcast connected-television, online video, display and paid social. The campaign also includes out-of-home and direct mail through the tri-state area.

Founded in 2015 and also headquartered in New York, meal delivery platform Freshly noted on its website on Dec. 23 that it is shutting down, as reported by PYMNTS.

According to the website’s FAQs, Freshly will accept orders until Jan. 17.

As previously reported, Nestlé USA recently reduced its stake in Freshly to 41% in a merger with food manufacturer Kettle Cuisine, which provides fresh foods for retail and foodservice customers -- so no more D2C.

Meanwhile, meal kit company Blue Apron said last month that it was laying off roughly 10% of its corporate staff. The New York Stock Exchange recently warned the company that it could face delisting because its share price had traded for less than $1 for at least 30 days.

In October, meal kit company HelloFresh said it was laying off just over 600 employees, as reported by the San Francisco Business Journal.