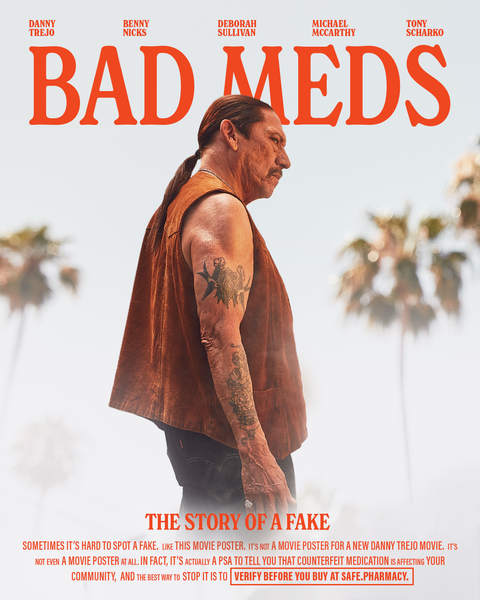 If so, look at the fine print below the film’s tagline, “The Story of a Fake,” and you’ll discover that it isn’t a movie poster at all, but a fake designed to tell consumers that “counterfeit medication is affecting your community and the best way to stop it is to verify before you buy at Safe.Pharmacy.”

The poster and corresponding movie trailers (“Tomorrow. Comes the fakest story ever told”) are part of a much larger multiplatform effort that’s likely the first to ever combat counterfeit meds -- a dangerous and growing problem, according to the campaign’s impressive cast of backers.

Furthering the theme that fake stuff is great in the movies, but not when it comes to medications, Danny Trejo stars in a TV spot from creative studio The Artery that comes in :45, :30 and :15 versions.

After demonstrating one fake thing after another on a movie set, Trejo declares that “fakes like those don’t scare me, but fake meds, that’s a different story. Verify your meds with Safe.Pharmacy.” The ad then uncovers one other significant fake, before ending with the line “95% of all online pharmacies operate illegally.”

That’s just one of the statistics Safe.Pharmacy cites to show the magnitude of the “bad meds’ problem. Others include that nearly half of Americans now purchase their medications online; the World Health Organization reports that more than 1 million deaths occur annually from counterfeit or substandard drugs; and forensic testing from the Drug Enforcement Administration reveals that four out of every 10 counterfeit pills contain a potentially lethal dose of harmful ingredients.

The campaign is targeted specifically to vulnerable patients, including minority and homeless communities that Safe.Pharmacy says are more at-risk for receiving counterfeit drugs.

In addition to social media and influencer marketing, the campaign is using broadcast TV, radio, print (including Forbes and Time), and out-of-home (including transit and a live digital billboard roadblock with captions in New York’s Times Square.)